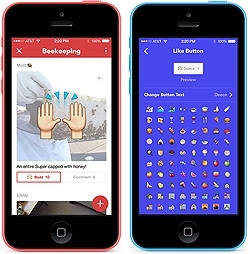 Continuing to diversify its app offerings, Facebook just launched Rooms -- a platform for people to connect based on similar interests rather than social ties.

Josh Miller, an app developer at Facebook, likens Rooms to early Web communities, like forums and message boards, which “were meeting places for people who didn’t necessarily share geographies or social connections, but had something in common.”

According to Miller -- who joined Facebook in January when it acquired his product startup Branch for $15 million -- Rooms replaces something that has been lost in the age of mobile.

“Today, as we spend more time on our phones, primarily to communicate with friends and family, the role of the Internet as a ‘third place’ has begun to fade,” he explained in a Thursday blog post.

Rooms consists of “rooms,” which are basically feeds of photos, videos, and text. Like a forum or chat room, each room’s topic is determined by its original creator. In testing, users have already created rooms for beat boxing videos, parkour, and photos of home-cooked meals, according to Miller.

Of note, Facebook is encouraging the Rooms community to come up with their own handles, rather than use their real name. Coincidence or not, Facebook recently came under fire for its “real-name” policy.

“In Rooms you can be ‘Wonder Woman’ -- or whatever name makes you feel most comfortable and proud,” Miller made clear. “You can even create different identities for different contexts.”

Rooms is clearly part of Facebook’s broader strategy to offer additional apps, rather than squeeze its full suite of services into a single mobile offering.

Earlier this year, for example, Facebook broke off its messaging service, Facebook Messenger, as a distinct app.

In June, Facebook launched a Snapchat-like app, dubbed Slingshot, which lets users share pictures and video along with text to friends.