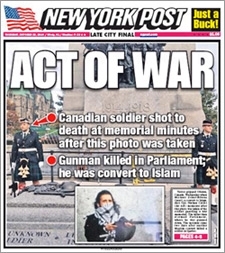 The New York Post, part of News Corp., has selected Goodby Silverstein & Partners New York as its creative agency for a new campaign, the agency has confirmed. The campaign will launch before the end of the year and will include digital, outdoor and experiential activations.

“We couldn’t be more excited to partner with the New York Post,” said GS&P New York Managing Director Nancy Reyes, a Goodby veteran who headed East to help open the shop’s New York office in January of 2013. “It’s such an iconic brand with a unique point of view that has become a staple for the city and digitally nationwide.”

Paul Caiozzo, who joined GSP’s New York office earlier this year as executive creative director, added: “Day in and day out, journalists at the Post report on news in way that is creative, engaging and addictive, and we’re really looking forward to working with the whole team.”

NYP, considered the city’s liveliest tabloid newspaper, was founded in 1801 by a group of investors led by Alexander Hamilton. The paper claims to be the nation’s oldest continuously published daily newspaper.

The Post joins Comcast/XFINITY and Rock the Vote on the client roster of GS&P New York. The office has also done work for Google and YouTube.