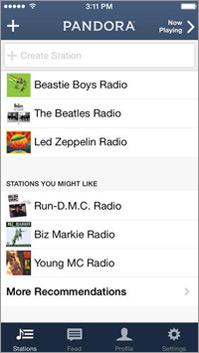 Pandora wants to stay atop the charts for online music streaming. To that end, the company late last month kicked off a new brand campaign tied to its thumbs up/thumbs down feature for rating songs. Eight listeners who had just given “thumbs up” to popular YouTube artist Lindsey Stirling received a message from her inviting them to a live chat session and special performance from the violinist via a Los Angeles studio.

During Pandora’s earnings conference call Thursday, CEO Brian McAndrews highlighted the new “Thumbs Up” campaign, which he said is designed to “build on our unique ability to create a personal connection between listeners, their favorite artists and the music they love.” The video of the Stirling performance has been viewed 18 million times, and a second video in the series from the band Bush has just been released.

McAndrews said to expect an expansion of Pandora’s marketing efforts through the end of the year and into 2015, as the company explores more ways to increase the growth and retention of its listeners. The company’s third-quarter results showed why it planning a renewed marketing push. Pandora’s active user growth slowed from a year ago to 5%, while the increase in listening hours declined a bit from the prior quarter.

Both metrics fell below Wall Street estimates, contributing to a 14% slide in its share price in early Friday trading. In the earnings call, McAndrews acknowledged Pandora faces “an increasingly competitive environment” without specifically referring to the likes of iTunes Radio, iHeartRadio, Google All Access or Spotify.

Similar to Pandora, Google earlier this week began making music suggestions in its streaming service based on educated guesses about a listener’s mood or past preferences. People will also be able to request playlists geared to specific activities like housecleaning or napping.

“What we're seeing is consumers using, or perhaps trying, more services than was the case in the past. And often using two or three for different situations,” like at home or in the car, said Russ Crupnick, managing partner of MusicWatch, a consumer research firm focused on the music industry, in an interview Friday.

He noted that two-thirds of the U.S. music-streaming audience in a recent MusicWatch survey said they used Pandora at least once, indicating that the service still has a commanding position in the category. And while the 18% gain in listener hours per month in the quarter may have fallen below analysts’ estimates, he suggested it still indicated ongoing loyalty.

Pandora's mobile ad sales also continue to catch up with the predominance of usage via smartphones and tablets. Mobile advertising now accounts for 78% of total ad revenue while 84% of total listening hours come on the mobile side. It also benefits from comScore making combined desktop and mobile audience the default for its monthly rankings of the top 50 U.S. digital properties.

While Pandora previously didn’t make the list of top properties measured by desktop traffic alone, it jumped to No. 19 in the September ranking, with a combined audience of almost 85 million. Separate comScore data this month, however, showed iTunes Radio creeping into the top 15 apps, with 21.7% reach in August compared to Pandora’s 45%.

No wonder it plans to ramp up marketing efforts. In the third quarter already, Pandora’s marketing expenses grew 50% from a year ago compared to a 40% overall revenue gain. “And "as we look into 2015, we do expect to see increased spending both from a brand standpoint as well as from a direct marketing standpoint," McAndrews told analysts.