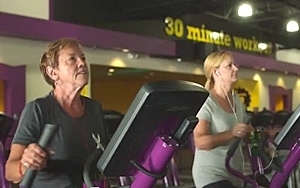 In an effort to cheer on all the achievements of its members, Planet Fitness is calling out personal success stories, creating an online community called Planet of Triumphs.

“We developed this because we know amazing things happen in our clubs every day, and we wanted to showcase that in a way that is unique to our brand,” says Jamie Medeiros, marketing VP for the Newington, N.H.-based chain.

And with its “Judgement Free Zone” and “No Gymtimidation” positioning, she says those triumphs can be anything from “I spent 10 minutes on the treadmill today, after not working out for a year” to “I’ve lost 100 pounds.”

She tells Marketing Daily that the chain’s mobile app is the key to the digital effort. Members can join Planet of Triumphs by creating a profile or signing up with either Facebook or Twitter. They can then use “story starters” to record their own triumphs, such as “One year ago, I never thought I would have…” “It makes me so happy to say …” or “before 10:00 am, I …” They can upload their photos from their phone, or use images provided by the site. Initial stories include a woman battling back to fitness after a spinal surgery, for example, and a 90-something couple who work out together.

To boost participation, each of its 850 clubs is offering weekly prizes for the Triumph of the Week, as well as some big-ticket rewards, including a grand prize of a walk-on role in a 2015 commercial. Members will also have a chance to win tickets to “The Biggest Loser” finale. And she says it also expects to expand to offer prizes linked to a charity as well.

For now, she says the effort will just be digital, and it’s timed to lead into the first quarter, the chain’s busiest season.

She says the company “may integrate stories from Planet of Triumphs in our TV ads in 2015, to amplify our message. We feel that since no other gym is as committed to all kinds of achievements, no matter how small, this really speaks to who we are.”