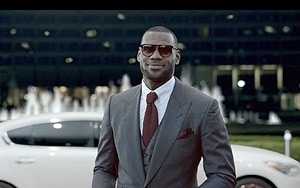 Kia Motors America has been working hard to get out the word that with its new K900 sedan, it is a serious contender in the luxury auto category. The company's biggest bullhorn is its relationship with the NBA, of which it has served as official auto partner for six years.

Its first move to align luxury with hoops was to tap Cleveland Cavaliers mega star LeBron James as its K900 "Luxury Ambassador." With that deal, which happened a few weeks ago, James joins Blake Griffin as official Kia pitchman.

James hits the deck for Kia this evening in a new TV spot for the K900. The ad is debuting as the ink is still drying on a new contract between the NBA and Kia is extending -- and expanding -- the latter's status as official automotive partner of the league. The new deal also makes Kia its official luxury vehicle.

in addition to the new spot, wherein a valet takes James' keys as the player strolls up the red carpet at an event, Kia will have a lot of in-broadcast positioning and NBA digital integration this week during Kia NBA Tip-Off 2014. The brand will be on the countdown clock on NBA.com and NBA TV, will grace court-side signage, and will be part of the league’s own “Everybody Up” brand campaign.

Among the tie-ins, Kia will also brand a new program called "Top Plays" on NBA.com. The promotion allows fans to vote on the top plays, with a vote-based Top Play of the Year announced at season's end.

The company is also running interactive programming in which fans can help shape a highlight-reel based commercial. Throughout the season, the NBA will post clips via Twitter and Vine for fan consideration. Plays that get the most retweets and loops will be aggregated into an end-of-season television commercial, scheduled to debut during The Finals. Kia is also getting behind a Holiday Gift promotion on NBA.com dangling a grand prize of a Kia Optima.