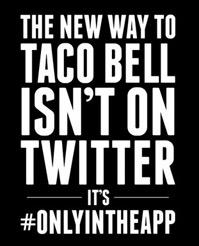 Taco Bell today unveiled an updated mobile ordering app with some industry firsts — and it's driving fans to download it by "blacking out" all of its social media channels, including Twitter, Facebook, Instagram and Tumblr, for at least the day.

Also today, Outback Steakhouse announced its own new digital tool, designed to let users see waiting lines at the restaurants in real-time and virtually reserve their place in them.

All of the messages are accompanied by a link to a page that offers a video preview of how the app works and links to download an iOS or Android version of it on the Apple AppStore or Google Play, respectively. Customers who have the existing Taco Bell mobile app can download an automatic update.

The chain is teasing fans by not stating how long the social blackout will last, although it tells Marketing Daily that it "won't stay away long."

While it's not for the moment being promoted on Taco Bell's own social channels, the QSR has also created a TV spot for the new app featuring self-described "Internet famous" Shane Dawson — who is of course getting the word out about his TV ad and the ordering app through his own social channels. In addition, there's a video featuring the Neon Trees rock band.

As for the app itself, Taco Bell says it enables customers to take customization of their orders to the next level, as they can view and select from all of the chain's ingredients and add-ons to build their own items.

The app is also the first from a national brand to allow users to opt to pick up their orders either in-store at a drive-through once they have ordered and paid securely, according to the brand.

The location-based ordering app alerts employees when the user arrives at the Taco Bell location, whereupon they create the order. Customers who pick up in-store can skip waiting lines.

Taco Bell says it's also the first business to offer an app with a patent-pending "Rotate to Reorder" feature, which — as one would guess — lets users reorder the last order made through the app by simply rotating the orientation of their smartphones or mobile devices.

During a press event, Taco Bell President Brian Niccol said that the new app "is just the beginning of how we’re using technology to break down the walls of our restaurants and become more transparent with our customers about our food.”

Niccol also announced that Taco Bell is entering the catering business, although he revealed no specifics.

The app and catering launch are the first significant announcements from Taco Bell since it made waves by entering the breakfast market earlier this year — a move that it says has been successful, although no specific sales information has been released.

The Mexican QSR has said it's committed to doubling its revenue to $14 billion and adding 2,000 locations over the next eight years.

Also today, Outback Steakhouse announced that on Nov. 4, it will roll out a Click Thru Seating Tool what it says is an industry-first tool for mobile phones, iPads or laptops that lets users see the seating wait-time for every Outback restaurant in the country in real-time and get in line virtually instead of standing in lines. Customers can also use the new Click Thru Seating tool to get their names onto the waiting list for any time that day.

Average waiting times of 40 minutes on busy weekend nights "have historically been a pain point to our customers," Outback CMO John Schaufelberger told USA Today. "We don't want that to be a barrier."

Consumers who use the tool won't be dropped from the wait list or be penalized if they're late. The tool could pose the risk of irritating those who've been standing in line and see app-using customers get seated first, food service consultant Jerry McVety noted to the newspaper.