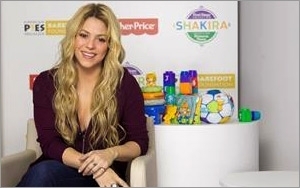 Fisher-Price is launching a Web series and a line of products in collaboration with musician and performer Shakira.

The Web series features Shakira’s reflections on motherhood. The entire series will distribute exclusively over digital to 23 countries, delivered via branded social channels and supported with paid media.

The co-developed line includes six products, called the First Steps Collection, covering all key developmental stages. Beginning mid-November, consumers in the U.S. can purchase the items exclusively at Amazon.com as well as Fisher-Price.com. It is currently available for pre-order on Amazon.

Shakira approached Fisher-Price about a year ago, says Lisa Mancuso, SVP of global brand marketing at Fisher-Price, a subsidiary of Mattel, Inc.

“She had recently become a mom and wanted to focus on her passion project — her Barefoot Foundation — which she founded at only 18 years old,” Mancuso tells Marketing Daily. “When we met face to face, we learned firsthand how deeply Shakira shared our commitment to early childhood development, driven by the notion that early learning can result in early advantages for children. Soon after that meeting, we began development of the First Steps Collection and Web series.”

Shakira’s compensation will be donated to the Barefoot Foundation to benefit early childhood development programs throughout Latin America.

Fisher-Price has partnered with many celebrities throughout the years, including its licensed music deals with Jewel and Nick Lachey, as well as partnerships with one-time event spokespeople like Rachel Zoe and Maggie Gyllenhaal, Mancuso says.

The partnership will continue in 2015 with new products like flashcards and toys that prominently feature the Kira character, which is inspired by Shakira herself, she says.

The program targets Millennials, who make up 80% of today’s first-time moms. Highly digital and hyper-focused on sharing opinions and recommendations with other moms, Gen Y moms are linked through the partnership to a relevant, global conversation with Shakira, one of the world’s most digitally savvy moms, who is now pregnant with her second child.

As a global program, each market will nuance its support with tactics that are relevant to its unique consumers, Mancuso says. In the U.S., paid digital media will target both Hispanic and general market parenting sites, as well as social media platforms like Facebook and Twitter. Other markets, such as Poland, Brazil and the pan-Arabic region, will leverage owned video content of Shakira for paid television integrations.

Shakira appears on the product packaging of her co-branded line of baby gear and toys, as well as in the digital media supporting the products and the Web series. Amazon also features Shakira’s image in its marketing of the toy line.