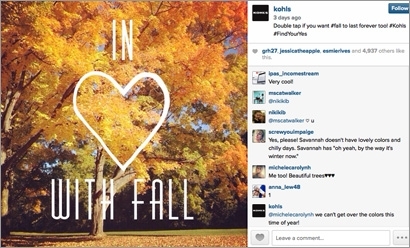 Kohl’s Corp. has been stumbling for the last few years, but the company says changes in its marketing mindset are already paying off. It has a brand new way to segment customers, and is shifting to more personalized and targeted messages, with a renewed emphasis on loyalty. And it’s also vowing to shift its focus to the national brands that are the primary reasons shoppers come to Kohl’s — from Disney to Keurig to Juicy Couture — and away from private labels.

In a day-long presentation to investors — the first the chain has hosted in seven years — executives of the Menomonee Falls, Wisc.-based retailer laid out growth plans, promising a “a new Kohl’s.” But the company, which has seen sales fall in five of the last six quarters, also warned that its comparable stores would likely be lower again — down 1.4% — when it announces its third quarter results.

Will Setliff, marketing EVP, outlined ways the chain is trying to build customer engagement by making shopping at Kohl’s a more personal experience. The media mix is shifting to emphasize social media, digital and direct mail. And in a new segmentation strategy, he says the company is now approaching its customers in four distinct groups: Kohl’s loyalists, who the company is targeting through their favorite channels; those who are under-engaged, who they are pursuing digitally with loyalty offers; infrequent visitors, who are most likely to pop into a Kohl’s during holiday events seeking national brands; and newcomers, who are most likely to come to the chain through the home department.

It’s also sharpening targets, for example, shifting its focus from 157 ZIP codes in the Houston area, to just 45 of the biggest spending areas.

And he says that its recently introduced Yes2You Rewards program — which he says already has 15 million enrolled, and about 20,000 shoppers joining per hour — is already yielding results, producing a 1.5% gain in comparable-store sales, adding two trips with an additional $80 in spending in test markets.

“We left Milwaukee with mixed views,” writes Chuck Grom, an analyst who follows the company for SterneAgee. “On one hand, it was refreshing to see the squad’s sense of urgency and willingness to embrace change more quickly than in the past.” But between another disappointment in sales results  and no new national brand announcements, “puts this seemingly perennial ‘show me’ story back in the penalty box ...  for now. It's time for Kohl’s to walk the walk.”