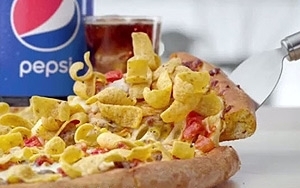 You say you've never had a craving for Fritos on your pizza?

Well, Papa John's and PepsiCo's Frito-Lay division are hoping you will cotton to the notion, now that they have teamed to create and co-promote a limited-time Papa John's Fritos Chili Pizza.

The brands said the flavor combo made sense because Frito pie is already a popular football tailgating snack. So it's not surprising that in addition to social media, Papa John's is running a TV spot for the pie that features football star Peyton Manning.

PepsiCo is Papa John’s exclusive beverage partner in the U.S., U.K. and Canada, and Papa John's said that its CEO, John Schnatter, reached out to PepsiCo when he decided about a year ago that he wanted to offer a crunchy pizza.

“It seemed like a no-brainer to collaborate with our beverage partner PepsiCo to bring its popular Fritos corn chips snack to our pizza," said Papa John's CMO Bob Kraut.

Papa John's was looking for ways to further boost its sales on Halloween, which is one of its biggest days of the year, and Fritos only stands to gain from millions of its chips being consumed on pizzas — not to mention the presence of a big bottle of Pepsi behind the Fritos pizza in the TV spot.