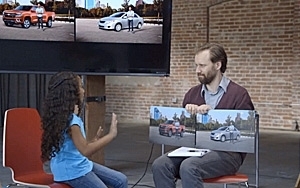 It's prime time for mid-size trucks. But forget bales of hay and work sites. Chevrolet’s campaign for the 2015 Colorado pickup truck, the first new mid-size pickup in the U.S. market for years, is about lifestyle, and the subliminal desire for every guy to have a hauler.

“You Know You Want a Truck” is the message in a series of new Web videos by Chevrolet's dedicated shop, McCann Worldgroup’s Commonwealth. That the audience for the mid-size crowd is a world away from Texas is apparent in the “Chevrolet Colorado, which comes standard with a lot of "technology and stuff" theme.

The videos, on Chevrolet’s YouTube channel, play on the idea that owning a Colorado makes you into that rugged, dependable and dateable guy you know you want to be. The videos, peopled by non-actors, are candid videos of real focus groups, online dating, and the health and beauty sections in supermarkets. They delve into the perception of the “truck guy” zeitgeist. Sibling brand GMC is also now selling the Canyon mid-size truck.

One video starts with V.O. of rhetorical questions: "Can a truck make you more handsome, more dependable, more rugged? We talked to real people, not actors." The twist is that the focus group included 6-year-olds, seniors, young single women, "rich housewives" and guys with beards. The group sees two photos of the same guy. In the first he stands before a grey Nissan Sentra-esque compact. In the second, he’s in front of a red Colorado.

The responses support the premise -- although one little kid, when asked what kind of pet the guy in the truck would have, says: "A tarantula." Another says, "Timberwolf husky." And there’s “Which vehicle would you rather have in a zombie apocalypse.” "A truck,” says a guy. “What's the matter with you?"

In the supermarket test, the agency created "Truck Guy Deodorant," intended to evince the certain ineffable truckiness of being. Then hidden cameras capture people grabbing the dispensers, sniffing and dropping them in carts. They are polled about why they chose the deodorant. The videos end with a focus on the left-brain side of the consideration operation: 4G LTE benefit, cargo, handling, safety, interior space.

“The films are centered around the idea that there is an inner truck guy in everyone,” said Paul Edwards, U.S. vice president, Chevrolet marketing, in a statement. The key takeaway, he says, is that the technology upgrades inside and under the hood, and carrying and towing ability eliminates the rational barriers.

But in September, per the firm, the average price was $3.43 per gallon, the lowest September rate since 2010, "and they have fallen further in October with many parts of the country reporting prices below $3,” said Thomas King, vice president of PIN, in the report. “As large pickup owners experience these low fuel prices each time they fill their tank, fewer of them are defecting from the segment.”