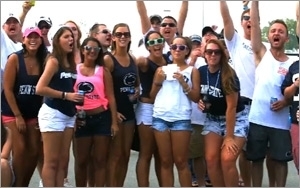 The RV industry is rooted in stereotypes, with many people associating large motor homes with retired couples driving across the country. While the industry was hit hard by the recession, wholesale shipments are expected to hit 350,000 RVs in 2014, marking five consecutive years of growth and hitting levels last seen prerecession in 2007.

Now, The Recreation Vehicle Industry Association, also known as Go RVing and its agency, The Richards Group, are launching a new campaign designed to broaden the appeal of RVs.

They are doing so by partying. Developed by The Richards Group's experiential marketing practice, Latitude, RVs are being positioned as the ultimate source of tailgating fun. "With RVs and sporting events being such a natural fit, we set out to create a tailgating experience that would showcase the features and amenities for a whole new audience," says James Ashurst, vice president of communications and marketing at GoRVing.

"Our primary objective is to raise awareness and broaden the appeal of RVing," says Ashurst. "We can only go so far in doing that through traditional advertising channels and experiential really allows us to go further. The challenge in creating the Tailgate Tour was finding the right partner to not only help us bring it to life but also give us some credibility for being at these major college games."

The Tailgate Tour concept was first launched in 2013 with six college football games and expanded to 10 stops in 2014. Latitude worked with the sports marketing group within its agency and a team from Sports Illustrated to identify the best combination of big game match ups and schools with a strong tailgating tradition.

"We also knew that it wouldn't be enough to simply have a presence at the marquee games. For our program to be a success, it was critical that we secure a premium spot at each location that would give us high visibility and high traffic. To accomplish this, we worked directly with the school rights holders to locate the best spots and the largest footprint for our activation," says Ashurst.

At each stop, the agency creates a colossal 50-foot x 100-foot multifaceted showcase to bring RVs face-to-face with more than 60,000 football fans. These experiences are supported with famous chef and player appearances, photo ops, games, and giveaways allow visitors to interact with RV brands.

The initiative also features experiential events with Outside Magazine (for the GoPro Mountain Games in Vail, CO), Garden & Gun and Country Living.

In 2014, the total Go RVing advertising spend was just over $13 million. However, the majority of those dollars are allocated to "traditional" marketing channels like television, print, digital, and social media; roughly $2 million of this ad spend goes to experiential/activation opportunities. Budget planning for 2015 is ongoing and experiential is expected to be a bigger part of the mix.

Indeed, next year, Go RVing and Latitude plan to expand on the number of activations as well as the activities and engagement opportunities within each event. They also will be actively identifying partner brands beyond football.

"Getting RVs in front of our audience, in places/situations where they may not have expected to come into contact with them, helps us to change perceptions," says Ashurst. "Through experiential, we have the ability to open prospects eyes to the features and benefits of RVs and doing that in the context of the actual event, in this case a college football game, brings it all together."

The Richards Group has worked with the trade association since 2002 and launched their first campaign in 2003.