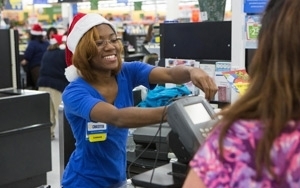 With all the tea leaves pointing to a jolly holiday, leading retailers aren’t waiting around for Black Friday to get the season started. Walmart, Amazon, and Best Buy are all barreling into promotions, tempting shoppers with everything from exclusive merchandise, dramatic discounts and free shipping. And with good reason: A new forecast from Deloitte predicts holiday spending may rise higher than earlier predictions.

Walmart, for example, says is starting the season with its broadest assortment of sales items ever, with price rollbacks on some 20,000 products, including such hot brands as Disney “Frozen," Teenage Mutant Ninja Turtles, Samsung and Dell. “As soon as they put away their Halloween costumes,” says Duncan Mac Naughton, Walmart’s chief merchandising officer, in its announcement, “our customers start prepping for Thanksgiving, buying Christmas trees and shopping for gifts. They want the best deals now, and we’re here for them today, next week and throughout the season.”

Amid reports that it will extend its current price-matching offer to include online prices as well, Walmart is also offering same-day pickup, and free shipping to customers' homes for orders that are $50 or higher.

Amazon is also already in the game and says it has started “Countdown to Black Friday Deals Week,” promising over 15,000 “lightning deals.” And Best Buy has begun with its St. Jude Thanks and Giving campaign, enabling every Best Buy register to accept donations for St. Jude Children’s Research Hospital. After raising $1 million last year, the Minneapolis-based retailer hopes to triple that and raise $3 million this year.

Meanwhile, consulting giant Deloitte anticipates a 13% increase in holiday spending, based on a survey of 5,000 consumers, with average expenditures of $1,299, including gifts, socializing away from home, entertaining, non-gift clothing, and home furnishings. Spending on gifts alone is expected to climb 9% to $458 this year, from $421 last year. That’s a substantially bigger gain than the 4.1% predicted by the National Retail Federation.

And for the second year in a row, Deloitte says the Internet is the No. 1 shopping destination, trumping all other channels: 45% of its respondents intend to shop online. And 68% of those people plan to look at items online, and then check them out in a store. (Some 49% plan to do the reverse.)

But despite these early promotions, Deloitte predicts retailers may have trouble luring early shoppers: Some 43% of its sample plan to do the bulk of their shopping in December, a jump of 6 percentage points from last year.