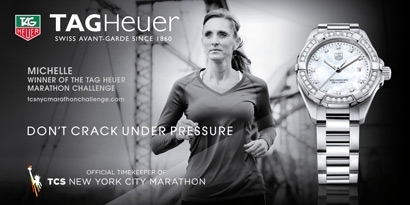 In September, TAG Heuer revived its “Don’t Crack Under Pressure” tag with a new campaign that touted athletic, science and art achievements of the company’s ambassadors, such as football star Cristiano Ronaldo and Formula 1 driver Jenson Button.

The effort showcased the individual feats each man or woman achieved — all without bowing to pressure.

Building on the original creative, Tag Heuer is debuting a billboard in Times Square Nov. 1 with its latest brand ambassadors: Michelle DeLucca and Justin Michalski. DeLucca will run in Sunday’s New York City Marathon. She took up running as part of her fight against Achalasia, an autoimmune disorder.

DeLucca is joined by Justin Michalski, whose teenage drug and alcohol addiction led to an arrest and numerous family problems. Michalski is now sober, and a parent who runs to maintain a healthy lifestyle. He runs with Team for Kids, a committed group of adult runners from who raise funds for NYRR's Youth and Community Services programs while training for major endurance events.

“The Don’t Crack Under Pressure” campaign underscores core TAG Heuer values: determination, courage and the quest for excellence. Since its founding in 1860, the company has sponsored prominent sporting events worldwide.