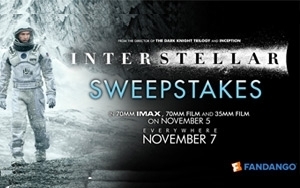 Moviegoers buying a Fandango movie ticket to Christopher Nolan's "Interstellar" released by Paramount Pictures will have a chance to win a flight to the outer regions of space aboard the Lynx Mark II, a spacecraft built by XCOR Aerospace.

The sweepstakes is the result of a partnership between Paramount Pictures and Vice Media's Motherboard channel and Fandango.

The prize package includes simulator training and lodging in Mojave, travels to and from the spaceport and $50,000 cash for a total of about $160,000, per Adam Rockmore, Fandango's head of marketing.

The movie scheduled for a Nov. 5 release stars Matthew McConaughey, Anne Hathaway and Jessica Chastain. It follows a group of engineers and astronauts who leave a decaying Earth in search of habitable planets across the universe.

Fandango plans to promote "Interstellar" through paid-search campaigns, social media on Facebook, Twitter and Tumblr and display ads on its Web site. Rockmore estimates about a couple of million impressions across the life of the movie through affiliate marketing and paid search.

The campaign will run on both desktop and mobile. Rockmore said ticket sales from mobile devices exceed 50%, sometimes as high as 65%.

"Next week, we will send emails promoting the movie and trip into space to about 8 million moviegoers," he said.

Promoting the movie, Fandango also plans to take advantage of its newly acquired MovieClips destination on YouTube, which has about 250 million views monthly. The page continually refreshes with movie clips.

A Fandango poll of more than 1,000 "Interstellar" advance ticket-buyers on its site reveals 81% of fans have always dreamed of space travel.