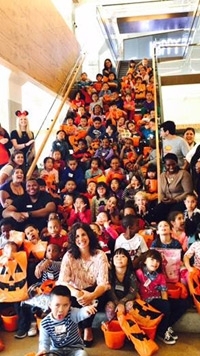 There have been cronuts and improv sessions. Director Robert Rodriguez has doled out his words of wisdom. But Horizon staffers say their favorite day this year has been Wednesday, October 29 when the media services agency surprised children for Halloween.

Horizon invited more than 70 first-graders from a local elementary school on the Lower East Side in New York City to trick or treat around its office. Rather than partnering with a children's organization, this was the first time Horizon reached out to an elementary school directly.

And in order to make this year's Halloween extra special, the agency also provided costumes for them as well. In fact, Horizon had so many costumes, it was able to send additional costumes with the teachers as another special gift for more children.

The school kids were given very little information about their field trip – they were only told by their teachers that they would experience a super, secret, surprise. They didn’t know they would be trick or treating and they definitely had no idea they would leave with their own Halloween costumes donated and picked out by Horizon’s employees. "Elsa was highly coveted, as was the ninja costume," says Eileen Benwitt, Chief Talent Officer at Horizon Media.

"What better way to leverage our philanthropic culture and our amazing space by mimicking Halloween festivities for children who otherwise may not have the opportunity to participate,” says Benwitt. “Our employees eagerly jumped on board, purchased costumes for every child, and brought in pounds of candy to ensure the kids had the ultimate Halloween experience. They were thrilled by our generosity."

Halloween is an important holiday for the agency. Every year, it releases in-depth research that tracks the evolution of a holiday once for kids, but now an all-age extravaganza.

In fact, Halloween is the candy holiday, rather than the costume holiday: candy is the most popular purchase, with 59% of consumers using the day as an excuse to buy something sweet.

“The emphasis on candy spending is a bit surprising," says Kirk Olson, VP of TrendSights at Horizon Media. "With hit shows like Gotham, The Walking Dead, American Horror Story, and Bates Motel making fun and fear de rigeur, you might expect more dressing up. But this research suggests that Halloween 2014 is about sweet indulgence and relaxation above all else. As the holiday nears, that means brands may get further ahead by emphasizing celebration and being social in media and messaging. Social media would be a great place to start.”