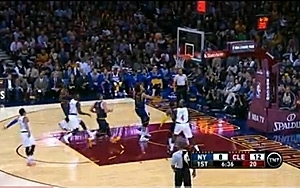 Since joining Media Storm parent Water Cooler Group as president just over a year ago, one of Antony Young’s top priorities has been to broaden the client base beyond media company and entertainment clients, such as Food Network, MTV, Starz Entertainment, MLB Network, Sundance Channel and dozens of others.

The company’s efforts to do so are starting to pay off. In just the last month, the company has been awarded media AOR duties for three well-known sports and consumer brands, including the National Basketball Association, Bowlmor AMF and retailer Forever 21.

Forever 21 didn’t have an AOR and is ramping up its advertising effort for the holiday season. Bowlmor AMF held a formal review, while the NBA recently hired a new CMO, Pam El and invited Water Cooler to pitch the account outside of the formal review process. The agency had done some project work for the league in the past.

Although nobody is confirming numbers, combined spending that the agency will place on behalf of the three accounts is estimated at about $60 million. Earlier in the year, the company won both the Phillips 66 and Memorial Sloan Kettering media assignments.

According to Young, the former CEO of Mindshare North America, Water Cooler’s expertise in tune-in marketing and other campaign techniques for media companies are big selling points when pitching non-entertainment accounts. In the entertainment sector, Water Cooler orchestrates a lot of partnerships to co-promote brands. With content creation and distribution becoming increasingly important among non-entertainment companies, “they like what the media brands are doing to market themselves,” said Young.

For example, heading into the new TV season, Media Storm facilitated a partnership between the Fox show Brooklyn Nine Nine and Waze, the social GPS app recently acquired by Google. As part of the arrangement, Brooklyn Nine Nine star Terry Crews agreed to let the app use his voice for user destination directions. The app claims more than 50 million users worldwide. While it was part of a broader promotion effort, “there was a lot of buzz around it,” Young said, all of which helped the program get off to a good start.

Given the increased focus on marketer-owned content Young says potential clients are also attracted to Water Cooler’s recently adopted strategic approach to planning unpaid media first. For many general-media agencies, he notes, “that’s the icing, for us its core to our strategy.”

Just as media and entertainment companies want consumers to share their content, increasingly non-entertainment brands are looking to achieve that as well, particularly in the retail space but also other sectors. “People like content and they want a deeper richer engagement with content regardless of the source so that’s where we start.”

While media agency Media Storm is probably Water Cooler’s best-known brand, it also has a creative shop, Maude and a social agency, Hip Genius, which help clients to develop content and help them decide on the best channels to distribute it.

The company also made an acquisition this summer, buying JubaPlus, which sits as a separate technology and advanced analytics division within Water Cooler and which does market mix modeling and other analyses, helping clients forecast the sales they’ll likely achieve given spending budgets allotted for different channels. Phillips, Forever 21 and BowlMor are among the clients using the JubaPlus offering.

The company holds financial numbers pretty close to the vest, but in recent years has acknowledged growing revenues at an annual rate of 20%. Growth in 2014 is expected to be in the same range.