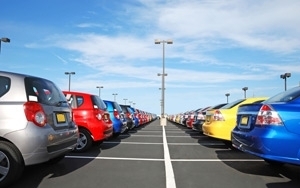 Auto marketers, both OEM and retail, are still spending big on traditional media, with over half their money going to TV and radio. But they are increasingly going digital, driving traditional spend down toward one-third of the total as the market regains strength and looks to hit pre-recession sales volume this year, at 16.3 million new cars and trucks delivered to consumers.

Auto is the second-biggest ad spend category in the U.S. at $35.5 billion in measured media behind general merchandise stores, with dealers spending $21.2 billion and manufacturers $12.3 billion -- a 21.8% and 12.2% increase versus last year, respectively.

A new industry paper from Williamsburg, Va.-based local ad-spend firm Borrell Associates shows that with those dynamics at play, plus fewer auto brands and fewer dealers on the post-recession playing field, there is more per-dealer revenue, meaning bigger ad budgets.

Professional review sites were noted by 62% of respondents, and TV sites by 53%. Social media and video sites each were mentioned by 37% of those surveyed. In terms of content, Borrell says the lion's share of digital spend -- over half -- will be combined outlay for video, at 28.4% and targeted display primarily at social sites, 12% of spend.

All of this is changing dealer culture. As Borrell points out, people who come into dealerships are a lot like people who shop in other brick-and-mortar establishments: they are going in to pick up what they've already chosen online. Per Borrell, there are also far fewer "fall throughs" — people who change their minds about buying a new car after visiting a showroom.

"Gone are the days when half the people who walked into a dealership left without buying a new car," says the report's author Kipp Cassino, EVP of Borrell. "Those who arrive at the dealership [today] know the car they want to buy and everything about it, including the price the dealership will likely agree to." The fall-through rate was 25% last year versus 56% in 2009, notes Borrell, citing data from NADA and Scarborough. The firm predicts the rate will drop to 19% this year and 15% next.