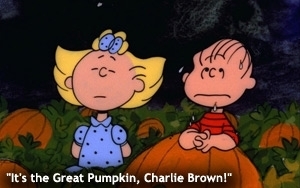 Pity the poor Parents Television Council. And while you’re at it, you can thank them too.

Why? Because we should always take pity on those who undertake lost causes, and keep on undertaking them, despite the long odds against their efforts making any difference.

Take the PTC’s most recent gripe concerning the manner in which ABC programmed last Thursday’s prime-time lineup. The council -- a Los Angeles-based watchdog group that monitors the airwaves for content it deems extreme -- is complaining about the way a kiddie Halloween special segued abruptly into a sex scene that opened last week's episode of “Scandal.”

Here’s what happened: “It’s the Great Pumpkin, Charlie Brown” aired from 8:30 p.m. to 9 p.m. (eastern time), right before “Scandal” at 9 o’clock. And in the “seamless” way that prime-time shows are programmed these days, no sooner had the final frame of “Charlie Brown” been seen -- with Sally Brown angrily kicking her school locker because she had spent Halloween night in a pumpkin patch with Linus -- than Kerry Washington was seen in bed in a steamy sex scene (which turned out to be a vivid dream she was having)

The PTC was outraged, although it waited until this week -- Monday -- to put out a statement decrying this example of thoughtless, ill-mannered network scheduling.

“Shame on ABC for putting a peep show next to a playground,” said the statement attributed to PTC President Tim Winter. “In less than 26 seconds, we were taken from the Peanuts pumpkin patch to a steamy 'Scandal' sex scene. Twenty-six seconds, boom. Unless parents had the remote control in their hand, thumb on the button and aimed directly at the TV screen, they didn’t have a chance. Such a transition is grossly irresponsible by the network and entirely unfair for parents. ABC owes families an apology.”

No statement from ABC -- apology or otherwise -- was seen in any of the various reports that turned up Monday and Tuesday on the TV Web sites about this new salvo from the PTC. No one should hold his or her breath waiting for ABC to apologize either.

One could argue that 26 seconds was more than enough time to whisk the kiddies out of the room before they could be scandalized by “Scandal.” (Judge for yourself: Watch the segue here.) Still, viewers shouldn’t have to be put in the position of having to abruptly shoo their children out of a room because of the way a network programs its shows.

The PTC statement continued: “Network programmers know the importance of audience flow when constructing their broadcast schedule, and in fact they build their schedules around audience retention rates. So they know full well the importance of program adjacency.  The juxtaposition of a reliably classic family-friendly children’s cartoon special like ‘The Great Pumpkin’ -- a huge family draw every year for decades -- with such a graphic bedroom scene is unjustifiable. We call on ABC to apologize for its actions and to promise not to do such a thing in the future.”

The PTC is right, of course. ABC should have tried to do something to mitigate against this abrupt segue. Ordinarily, such consideration would be unnecessary, since the customary lead-in for “Scandal” is the equally adult “Grey’s Anatomy.” However, on this particular Thursday night, with the first third of the network’s lineup taken up by children’s programming that was incompatible with “Scandal,” it evidently didn’t occur to anyone at ABC that this juxtaposition might present a problem. Or, if it did occur to them, they evidently didn’t care enough to do something about it.

As for the PTC and groups like it, it is easy -- if not downright fashionable in some circles -- to poke fun at these self-appointed watchdog types. People accuse these watchdogs of overreacting, or practicing censorship, or just plain acting like fuddy-duddies.

But I prefer to give them credit for adopting a point of view and sticking with it, even if their complaints and criticisms won’t make a bit of difference.

broadcasting, kids 6-11, regulation, tv
3 comments about "Watchdog Group's Gripe About 'Charlie Brown' And 'Scandal' Is A Lost Cause ".
Check to receive email when comments are posted.
Read more comments >
Next story loading