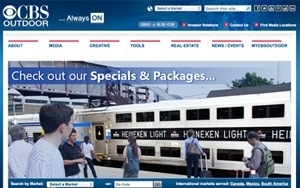 The loss was due mostly to a decrease in the company’s billboard revenues, which fell 0.8% to $237.2 million, despite growth in its digital billboard business.

The weak overall billboard results were offset somewhat by a 0.2% increase in transit and other revenues, to $99.3 million.

The business generally suffered from weak national ad demand, according to CBS Outdoor chairman and CEO Jeremy Male, who noted: “Our third-quarter results reflect the softer national trends we announced in September, which were offset by solid local growth and a notable improvement in our international properties.”

On the international front, revenues increased 2% to $40.2 million on a constant dollar basis, although this slipped to a 3.6% decline due to significant foreign currency fluctuations.

Last month, CBS Outdoor announced that it had completed the acquisition of most of the outdoor advertising assets of Van Wagner Communications, making it the country’s second-largest outdoor advertising company in terms of billboard assets, after Clear Channel Outdoor.

The $690 million deal, first announced in July, gives the newly independent CBS Outdoor control of 1,094 large-format billboard displays across eleven top markets, along with 8,386 other outdoor ad displays of varying sizes across the U.S.

Earlier this year, CBS Outdoor was spun off by CBS Corp. as an independent company, and initiated the process to convert into a real estate investment trust in order to lower its tax burden. The company received approval for the REIT conversion from the IRS in April, and officially completed the conversion in July.