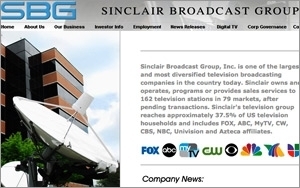 Local broadcast TV operators Sinclair Broadcast Group and Media General both enjoyed substantial revenue growth in the third quarter of the year, powered by acquisitions and political advertising ahead of the recent midterm elections.

In October of last year, Sinclair completed the acquisition of four stations own by Titan Broadcast Group, in addition to agreements to provide sales representation to two other Titan stations. In November of last year Sinclair picked up 18 TV stations acquired from Barrington Broadcasting Group, and the non-license assets of KRNV (NBC 7) in Reno, NV.

More recently, in September, the company acquired WGXA-TV (FOX/ABC) in Macon, GA. This month, Sinclair completed the acquisition of eight stations owned or operated by New Age Media and is currently in the process of swapping three of its own stations for four stations owned by Media General.

The company is also acquiring two stations owned by LIN Media and one station in Savannah owned by WTGS Television and operated by LIN. Sinclair expects these deals to be complete by the end of the fourth quarter.

Aside from station acquisitions, Sinclair revenues also rose thanks to the seasonal bump in political ad revenues, which increased from $2.7 million in the third quarter of 2013 to $33.8 million this year (some of this increase also being due to acquisitions).

Media General reported that total revenues jumped 21% from $132.6 million in the third quarter of 2013 to $160.2 million this year, reflecting the impact of its merger last November with New Young Broadcasting Holding Co. Political ad revenues rose from $2.5 million to $21.4 million, more than offsetting weakness in national ad sales, which slipped 10% to $34.3 million. Media General attributed the national decline to a big dip in national automotive advertising, along with smaller decreases in the telecommunications, legal and entertainment categories. Local sales edged up 2% to $76.4 million.