'Alex From Target' Proves The Point That Sometimes There Isn't Any 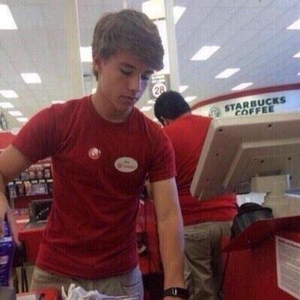 Some Internet memes rely on added sugar and mysterious ingredients to extend their shelf lives, as we discussed yesterday. Others, such as “Alex from Target,” are like French black truffles — not only are they wild, rare and out of the reach of most of us but they also require highly sensitive snouts to root them out.

Let’s get to the nut graf: “It turns out that Alex from Target is not a marketing ploy and he’s an actual, genuine person and bagger,” who just happened to be “fangirled” for his “super hot” looks while doing his job on the line in Texas, TMZ reported with all due exuberance yesterday. In fact, according to TMZ’s blurb accompanying its video report, “Little Al's employer tells TMZ the Internet phenomenon is 100% genuine grassroots.”

Lest you think this story is strictly for the tabloids, consider this revelation from the New York Times’ Leslie Kaufman: “The Alex phenomenon became the subject of news articles on the websites of Time, the Washington Post and CNN over the last two days. The Dallas Morning News tried furiously to confirm just which Target he worked for.”

And that’s nowhere near the half of it.

If you’re totally out of the fangirl/fanboy loop, let’s backtrack: “Over the weekend, a picture of a 16-year-old cashier now forever known as Alex from Target went mega-viral for no discernible reason save the fact that the Internet is 1) incredibly random and 2) run by teenagers who love adorable boys,” Time’s Laura Stampler writes.

Alex’s real name is Alex LaBoeuf. The girl who snapped the picture of him is Abby (@auscalum). On Tuesday, a digital marketing “startup company Breakr took to LinkedIn to claim responsibility for the viral stunt,” saying that Abby was one of its fangirl agents, Digital Trends’ Williams Pelegrin writes.

“We wanted to see how powerful the fangirl demographic was by taking an unknown good-looking kid and Target employee from Texas to overnight viral Internet sensation,” Breakr CEO Dil Domine Jacobe Leonares wrote. But Leboeuf, Abby and several other players in the chain of retweets and social media events elsewhere quickly denied having anything to do with Breakr, Pelegrin reports. And so we’ll let Breakr wallow in its own 15 seconds of apparently piggy-backed fame.

By yesterday, MTV’s Kat Rosenfield was reporting: “After becoming an overnight sensation thanks to the legions of lust-crazed teen girls on Twitter, Alex from Target has made his first official media appearance on ‘Ellen’ to discuss exactly how he went from bagging groceries in obscurity to captivating the internet as this week’s most beloved meme.”

“There is a whole attempt at making sense of this now,” American University School of Communication journalism professor Andrew Lih tells the NYT’s Kaufman. “But I can’t find any. The Internet is more and more like your local high school where inexplicably the crowd picks something that is not that interesting and elevates it to popularity status.”

But, observes Caitlin Dewey in the Washington Post: “All this goes to show that teenage girls, particularly teenage girls coalesced in fandoms, are perhaps the most powerful, and most underestimated, force shaping mainstream Internet culture. If they glom onto something, whether it be a new One Direction single or the photo of some baby-faced Target cashier, it will go viral.”

But let’s face it, something like Alex from Target is as uncultivable as Taylor Swift’s rabidly protective fan base — the kind of phenomena that all the marketing dollars in the world can’t grow in the backyard. But take heart. They’ve apparently figured out how to cultivate Tuber melanosporumin Oregon. And Chevy showed us last week that this "go with the flow" stuff ain’t so hard to figure out either.

internet, retail
1 comment about " 'Alex From Target' Proves The Point That Sometimes There Isn't Any".
Check to receive email when comments are posted.
Next story loading