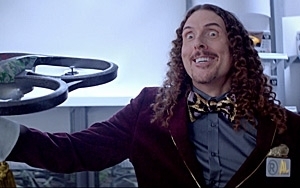 Nothing like life on the edge to get the creative juices going: Radio Shack, which has raised enough cash from lenders to limp through the critical Christmas season, has tapped Weird Al Yankovic for its holiday ad. And in a fun digital twist, the spot is breaking in cinemas, where viewers will be able to use the Shazam app on their phones to download a longer version of Weird Al’s “Toyland.”

The struggling Fort Worth, Tex.-based retailer chose Weird Al for his “cross generational appeal,” says Jennifer Warren, its CMO. “He’s had a resurgence, including a No. 1 album, and an appearance on the Grammies, as well as a recent tour of the talk shows.” And while he rose to fame during the 1980s, “he is very relevant again.”

Specifically, she tells Marketing Daily, the singing comedian’s social skills make him a good fit for Radio Shack, in its efforts to connect with young parents. “He’s got 3.5 million Twitter followers. This is his first commercial in 30 years, and he has a big following with the tech crowd.”

The ad, part of its “Gift Smart” campaign, is from GSD&M, and Marianne Malina, president of the Austin-based ad agency, says they started with a script, and then collaborated with Weird Al for the finished product. A Radio Shack customer asks an associate whether they stock Heliquads, prompting Weird Al to explode into song, explaining that Radio Shack is the perfect place to find gifts for boys, girls, and “even cousin Bob who’s 43 and lives at home.”

Malina says the company’s precarious financial status didn't influence the approach. “Fear is not part of the equation here,” she says. “Optimism is.”

GSD&M’s work for Radio Shack has gotten plenty of attention in the last year. In its brash Super Bowl spot announcing its renovation  (“The ‘80s called—they want their store back”), ads worked in such Reagan-era icons as Alf, Mary Lou Retton and Hulk Hogan. And in controversial spots spoofing a father and son talking about “protection,” it offended some Christian groups.

“Everything we’ve done together, including the Super Bowl spot, is about getting buzz, and getting back into the conversation,” says Warren. And the “Gift Smart” effort grew out of research done during last year’s holiday, intercepting parents as they left stores. “Parents are looking for smart technology, things they believe are going to teach their kids. And they want gifts that aren’t typical.”

In addition to cinema ads, the spot will run on cable and in key football programming, as well as online, and in digital streaming services, such as Hulu.

Radio Shack has been on the brink of bankruptcy. Last month, a deal with lenders, it got a $120 million infusion to carry it through the holidays.