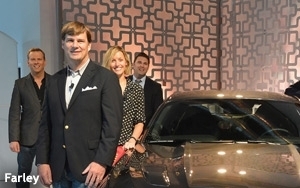 Jim Farley will move from EVP of global marketing, sales and service, to EVP and president for Europe, the Middle East and Africa, Stephen Odell's current position. Odell will take the spot vacated by Farley. Both report to Fields, who said in a statement that the changes are intended to be rotational, along the lines of what the Japanese brands traditionally do: shift talent around to give them broad experience.

“These moves also underscore our commitment to develop our senior leaders through deep experience within both our business units and our global skill teams,” he said.

Farley took the global marketing spot in 2007 where he oversaw integrated global marketing, advertising, digital communications, brand development and research, through Team Detroit, Ford's dedicated WPP agency group. His recent focus, however, has been in trying to relight Lincoln -- which was a main ambition of Mulally’s having straightened up the Ford brand. Matt VanDyke is Lincoln’s director of marketing, sales and service, with three-year-old New York-centered WPP agency Hudson Rouge, serving as Lincoln’s dedicated AOR.

Farley, who will focus on One Ford goals in Europe, was former group VP and general manager of Lexus. He also oversaw the launch of Toyota's Scion division as marketing manager there in 2002.

Odell is a Ford long-timer, having run Volvo and Mazda when they were Ford units, from 2008 to 2010. “Under [Odell’s] leadership, our European transformation plan is well under way, and we are poised to profitably grow as the region emerges from a long downturn,” said Fields. “[Odell] also was instrumental in turning around Volvo and Mazda by reinvigorating their product lines, improving their brands and addressing cost and capacity issues."

Ford has been doing well in Europe this year, with sales up over 14% in August, and retail sales up around 35%. In the first eight months, sales were up over 7%.

In September, Fields announced a longer-term vision for the global One Ford plan called Vision 2020, with a goal of boosting global sales by as much as 55%, with a focus on revitalizing Lincoln overseas, where it hopes to see the lion's share of growth. The company hopes to triple to 300,000 global sales with China leading.