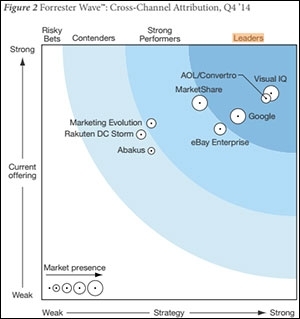 With AOL acquiring Convertro and Google acquiring Adometry, Visual IQ was left standing as the largest independent media measurement firm. All three companies were recognized in a new Forrester Research Wave report as leaders in the cross-channel attribution space.

Visual IQ, AOL’s Convertro and Google were the only cross-channel attribution providers to be highlighted as “leaders” in the space in Forrester’s new report, issued Friday.

“These vendors have strong core attribution methodology, reporting and analytics capabilities, and actionability on insights,” Forrester writes in its report.

The report does touch on the potential for a loss of measurement neutrality, considering that two of its three “leaders” are owned by AOL and Google, respectively. “Like AOL/Convertro, Google will face strong challenges from its clients and prospects regarding its ability to provide unbiased insights,” the report notes.

While it didn’t grab as many headlines as AOL’s Convertro buy or Google’s purchase of Adometry, another attribution company was swept up in 2014: DC Storm, a UK-based media measurement firm, was acquired by digital marketing firm Rakuten Marketing in May 2014. Rakuten DC Storm was named a “contender” in Forrester’s report.

Abakus was another company named a “contender” and is new to the cross-channel attribution Forrester Wave report. “Abakus is a small, but impressive, performance measurement vendor with core strengths in offline marketing and media integration, attribution approach, and on boarding services,” writes Forrester.

It appears that the three large attribution-related acquisitions in the ad tech space this year -- AOL/Convertro, Google/Adometry, and Rakuten/DC Storm -- have paid immediate dividends for the buyers.

The report notes that Adometry has allowed Google to “easily bridge the mobile and digital world,” while commenting on Convertro’s “substantial investments over the past few years, including integrating television insights data across the entire customer purchase path to measure cross-channel impact.” DC Storm was not on Forrester’s list prior to its sale to Rakuten.

The full Forrester report can be found here.