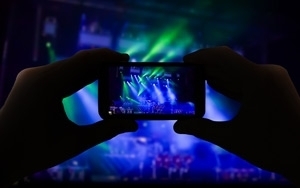 About as quickly as the smartphone became ubiquitous in American life so did the self-mockery of our obsessive absorption into these screens. Street walkers with heads down walking into oncoming traffic became a common trope. Parents scolding children texting at dinner became a ritual (especially when eating with the grandparents). In culture, as in physics, for every action there is some sort of opposite reaction, even if it may not be as equal and countervailing as in the physical world. We tend to register our own excesses in some way or another, if for no other reason than a general grumpiness over change. We like to complain about the ubiquity, annoying rituals of phone obsession, usually between among our own 50 or 60 phone look-ups a day.

The resistance to the always-on press of technology is evident in a number of little but important ways. Away messages in email and voice mail have become more prevalent and strident. Many people announce their unpluggedness via auto responses over the weekends or during vacation, where they declare proudly they will not be answering emails. And I usually get a reply from most of them in minutes anyway.

In addition to the dinner table and conversational rudeness that smartphones provoke, we also see them transforming a range of public events. Entire crowds of people have now grown a foot taller by virtue of phones being held up to record live events. Just about every concertgoer has experienced it, if not been part of the problem himself. Seeing the stage around and through a set of smartphone screens has become a regrettable part of the experience. The upside is that you can now find snippets of just about any recent concert performance on YouTube. The downside is that most live performances have become visual obstacle courses for the audience and even weirder experiences for some performers, who argue that their audiences no longer seem to be in the moment.

In an effort to get audiences to live in the moment, the new startup Yondr is offering venues smartphone lockboxes that prevent phone use while in the venue and create so-called no-phone zones. The attendee doesn’t hand over her phone at the venue door but must have her phone slipped into a locking sleeve that is then unlocked at the exit.

One would think that rights holders would be among the most enamored of the technology. But an Ars Technica reporter who tried the technology at a Yondr launch party says that most early clients are more interested in restoring the live experience. Yondr CEO Graham Dugoni told Ars Technica: “The copyright issue is certainly useful to some, but we have seen a lot more interest on the experiential side. A lot of artists simply want to have phone-free shows because they believe it makes for a better experience. Artists experience the issue most acutely, so it's not surprising they have been receptive to the idea."

Whether Yondr becomes a real fixture at public events is questionable. Personally, I think smartphones have become tools and even icons of personal empowerment. We will not put them away easily or willingly at this point. What is interesting to me is how Yondr does tease out a growing tension between smartphones and social etiquette. For many of us mediated reality has become the reality. Or at least, making a personal record of an experience is of such importance to us that we let it impede the experience itself. This is not entirely new, of course. How many families have that uncle with the camera or vidcam insisting that every moment of family gatherings and holidays be posed and kept as a photo memory? Apple’s famous holiday ad last year was a brilliant play on the phone-absorbed teen -- who makes a tearjerker film about the family from which we presume he is alienated.

"Man filming a concert with a mobile phone" photo from Shutterstock.