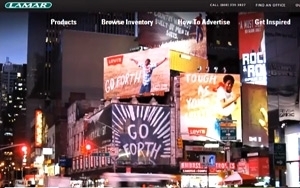 Lamar CEO Sean Reilly attributed the increase to increased local and digital advertising spending -- which more than offset sluggish national ad revenues, echoing trends cited by other big outdoor advertisers. Digital revenues were up 3.6%. Looking ahead Lamar expects total revenues in the fourth quarter to increase from 2.5%-3.5%, to a range of $323 million-$326 million.

In October the company announced the purchase of Marco Outdoor Advertising, which owns over 150 signs around New Orleans, including six digital displays.

More recently, Lamar scored a legal victory with a court ruling that municipal ban on new billboards in Los Angeles violated the firm’s First Amendment rights, opening the way for Lamar to install up to 45 new signs around the city (currently the city is appealing the decision.

Lamar is also in the middle of transitioning to a new corporate structure as a real estate investment trust, which should allow it to reduce its tax burden. The IRS approved the conversion in April of this year, and Lamar’s legal declaration that it would convert to an REIT was declared effective by the Securities and Exchange Commission on October 17 of this year. The company’s stockholders will vote whether to approve the REIT conversion at a special meeting scheduled for November 17.