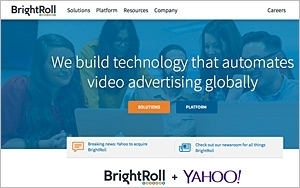 BrightRoll is a profitable business with net revenue expected to exceed $100 million this year, according to Yahoo, which believes the acquisition will "significantly strengthen Yahoo’s video advertising platform, making it the largest in the U.S." The platform reaches audiences across desktop, mobile and connected TV.

The acquisition also aims to accelerate Yahoo’s strategy, which is focused on search, communications, and digital content through growth in mobile, social, native, and video advertising.

"Video, along with mobile, social, and native, is driving a surge in digital advertising. Here at Yahoo, video is one of the largest growth opportunities, and BrightRoll is a terrific, strategic and financially compelling fit for our video advertising business," said Yahoo CEO Marissa Mayer in a prepared statement. "As with every acquisition, we have been extremely thoughtful about our approach to the video advertising space."

U.S. adults spend an average of 55 minutes daily watching digital video content on PCs, tablets and smartphones -- up 25% from the previous year, per eMarketer. Nearly 200 million consumers will watch videos at least once monthly this year, representing 61% of the population.

BrightRoll served more video ads and reached more consumers in the U.S. in 2014 than any other platform, per comScore. Tens of thousands of sites and mobile apps send approximately 2 billion requests per day to BrightRoll to monetize the inventory.