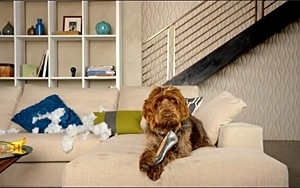 Nest Labs will launch a series of four television ads Sunday to bring awareness to its products. The TV campaign is the company's first foray into broadcast advertising, and part of the fall "Thoughtful Things" campaign, spanning TV, print, online and  experiential ads during the next several months.

Nest Executive Creative Director Matteo Vianello said this campaign is a departure from prior campaigns. In the past the ads catered to early adopters, the company's core market. "With this first foray into broadcast television, we wanted to find a different angle to tell the story," he said. "The ads are meant to humanize the products that haven't seen innovation in 50 years. We wanted to show how the products interact with the family to make them more compelling."

Google, which acquired Nest in January for $3.2 billion, does have an influence on Nest's campaign strategy, Vianello said. It wan't clear whether Nest will run a cross-channel campaign tying its paid-search mobile advertisements into the television campaigns, which Google often touts as important.

The campaign was created by the Nest Creative Studio, an in-house team led by VP of Marketing Doug Sweeny, which produces all of the brand's marketing pieces. These light-hearted ads look at people interacting with the Nest Learning Thermostat, smoke and CO alarm Protect, as well as Dropcam, the newest member to the product family. All television spots use humor to showcase what makes each product unique.

In fact each of the four 30-second television spots features an unlikely character as the spokesperson such as a child and a dog. The dog with a shoe in its mouth appears in control as he describes his thoughts on the video camera watching his every move, and after being reprimanded for ripping up pillows and chewing on a shoe.

The ads, which begin running Sunday through Dec. 21, will air during NFL Sunday, "Survivor," "Big Band Theory," among other shows, Vianello said. He refers to the the four TV ads as a branding campaign to create awareness for the products.