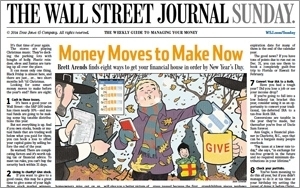 The Sunday Journal will wind down over the next few months, and the WSJ Radio Network will cease operations at the end of the year, according to Lewis.

In his memo, Lewis explained that “in order to do even more, we must do fewer things that are not core to our business so that we can move faster in pursuit of our goals. By focusing our resources on areas we believe are ripe for growth, we can operate with agility, efficiency and increased energy.”

With the demise of the Sunday Journal, Lewis said WSJ will focus on expanding the reach of its own weekend edition, WSJ Weekend, which was first launched in September 2005 in a bid to win more consumer advertising. The weekend edition includes the newspaper’s glossy luxury lifestyle magazine, WSJ. And while its radio network is going dark, WSJ will continue to produce audio content for distribution via digital platforms.

Dow Jones has already divested other peripheral WSJ assets as it seeks to focus on the newspaper’s core product.

These divestitures and closures are part of a larger strategic realignment dating back to a management shakeup earlier this year. In January, Lex Fenwick stepped down as CEO of Dow Jones, to be replaced by William Lewis, a News Corp. executive from Britain, first on an interim basis, followed by his permanent appointment in May.

At the time, media watchers speculated the decision was related to the lackluster performance of the company’s business newswires product, DJX, which was positioned as an alternative to Bloomberg’s widely used subscription-based financial information service.