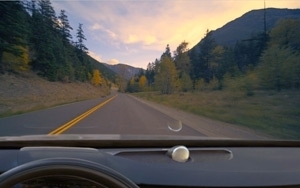 Volvo has tapped Google's virtual reality project Google Cardboard that allows consumers to take a virtual test drive in its XC90 model. The campaign debuts at the Los Angeles auto show. Potential car buyers can download a Volvo Reality app from Google PlayStore and insert their smartphone into the Google Cardboard viewer to immerse themselves in the sights and sounds of the open road. The app works on phones running Android or iOS.

The idea to put people inside the car without the physical car drove R/GA Executive Creative Director Jay Zasa and team to use Google Cardboard, a low-cost virtual reality platform similar to Facebook Oculus. With eight cameras, the team filmed a 60-mile stretch of the landscape in Vancouver, Canada, to capture the experience.

R/GA created the concept with Volvo and led the design, technical development and implementation. Framestore used its virtual reality expertise to film and create an unparalleled test drive in multiple dimensions. The approach included a combination of photoreal CGI and a proprietary, 360-degree VR camera technique.

With nothing more than a smartphone, cardboard, two lenses and a magnet, customers can experience a test drive that puts them in the driver’s seat of the XC90, says Bodil Eriksson, EVP of marketing, Volvo Cars North America. The car is scheduled to arrive at dealerships in 2015.

Download the app onto a smartphone, slide the phone into the Google Cardboard case and it makes the viewer feel as if they are in the car. The technology allows viewers to move their head to look around and see the interior of the car as if they were actually in it. It virtually puts people in the center of the Volvo XC90. The automaker said the app works with or without Google Cardboard.

Google Cardboard was introduced at the I/O conference earlier this year.