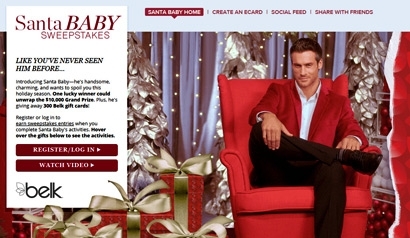 Tis the season that shoppers flock to malls, and Southern retailer Belk wants to capture their dollars, whether its online, in-store, or via mobile devices.

"The customer landscape is changing rapidly and attention spans are short," says Jon Pollack, Executive Vice President of Marketing, Sales Promotion and eCommerce, Belk. "We had to create a campaign that was unique, fun and compelling. We think we have achieved that."

This is the promotion's second year. "Last year’s campaign was successful, but we needed a more sustained and multi – faceted effort," says Pollack.

Through December 31, Belk customers have the opportunity to engage in seasonal activities, such as creating customized eCards and seeing if they’re on the "naughty or nice list," for a chance to win Belk gift cards of $10, $15, $25 or the grand prize of $10,000.

"Belk is a unique brand with loyal customers who appreciate the modern shopping experience,” noted Sara Kowal, VP of Innovation, HelloWorld. “Our goal here was to create a sweepstakes campaign that celebrates the holiday season in a fun way and rewards consumers for engaging with Belk.”

Belk's advertising costs were $162.3 million, $164.1 million and $152.0 million in fiscal years 2014, 2013 and 2012, respectively, according to company financial filings. The company hasn’t disclosed how much it is allocating to the Santa Baby effort.

HelloWorld has had Belk as a client since 2008.