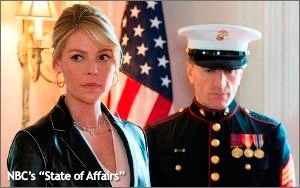 What are we to make of timing like this?

Tonight, NBC will introduce its new Katherine Heigl drama series about the War on Terror with a plot line involving the threatened execution of an American aide worker being held hostage by Muslim extremists.

Over the weekend, a similar story happened in real life, with the U.S. government confirming on Sunday that aide worker Peter Kassig was beheaded in Syria by Muslim extremists who took him prisoner in October 2013.

Let it be emphasized that there have been no signs today that NBC is thinking about rescheduling tonight's episode of the show (titled "State of Affairs”), or subbing the premiere episode with a later one, because of the news about Kassig.

Still, some people might argue that to go ahead with the premiere of a network TV show featuring a story so similar to such a grisly real-world tragedy that just happened is in bad taste (to say the least). Proponents of postponing the premiere might say it’s unseemly to air the show because it trivializes the news of Kassig’s murder by reducing it to the level of a TV show produced for an entertainment purpose (and as an environment for the sale of commercial time).

Others might argue that the close proximity of this real-life event only serves to make a show like “State of Affairs” more relevant.  The show, they might say, reflects and explores what its audience is already experiencing and absorbing in the real world, so why shouldn’t “State of Affairs” go on as scheduled?

Proponents of going ahead with the premiere might point out that “State of Affairs” certainly treats its subject serious enough, for the most part. In tonight’s premiere (10/9c on NBC) -- which I previewed -- no one in the episode’s fictional CIA or White House is heard making any stupid jokes about beheadings.

However, one scene begins with a group of CIA analysts joking lightheartedly about a series of terrorist movements that they are supposed to be assessing seriously on behalf of the President of the United States (played by Alfre Woodard) and the directors of the other agencies involved in Homeland Security.

Still, when they get down to the crises at hand, the risks involved in ordering special-ops teams in remote parts of the world to undertake missions in pursuit of hostages or wanted terrorists (to rescue the former and assassinate the latter) are pretty well-explored in “State of Affairs.”

The show also depicts how the bureaucracy of the intelligence community at the highest levels of the U.S. government can sometimes stand in the way of such missions -- creating counterproductive bottlenecks that undermine the chances for success.

The plot lines on view in tonight’s premiere (the aide-worker hostage story is just one of several) are told effectively, with some degree of suspense.  But like so many network dramas today, the premiere episode of “State of Affairs” does seem to take on too much all at once.

Not only is the Heigl character -- Charleston Tucker (yes, her name is “Charleston”) -- tasked with putting together the daily terrorist-watch briefing book for the President (starting her daily work at 2 a.m. in Langley), but we also learn that she almost married the President’s son, who was himself killed by Muslim extremists a year earlier in an attack that Charleston witnessed.

In other words, in this network drama series, it wasn’t enough for this CIA agent to shoulder the daily responsibility of monitoring the world for events that might endanger Americans, if not America. She also has to be the almost-daughter-in-law of the President of the United States.

Plus, in an unfortunate sequence that was ill-chosen to open the show, Charleston is seen blowing off steam by getting drunk in a bar, meeting a guy and then having sex with him. Her behavior immediately makes you think of Claire Danes in “Homeland,” whose character does the same thing. If you expected the writers of “State of Affairs” to make a better effort to distinguish their show from “Homeland,” then your expectations will not be met.

When Charleston’s shrink suggests that “no good can come” of Charleston’s wanton sexual behavior, Charleston replies defiantly: “Good doesn’t have to come. I do! And I’m not going to apologize for that!” Well, maybe somebody should.