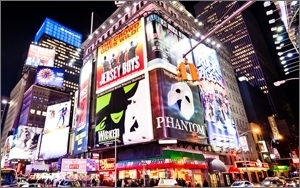 Just in case Times Square wasn’t visually overwhelming enough before, Vornado Realty and Clear Channel Outdoor’s Spectacolor division are taking it the extra mile with the unveiling of a gigantic new digital billboard the length of a city block.

Clear Channel landed management rights for the mega-billboard, which will be unveiled Tuesday night.

Measuring 78 feet by 330 feet for a total of over 25,000 square feet with around 24 million LED pixels, the sign runs the length of the Marriott Marquis building, located at 1535 Broadway between 45th and 46th Streets -- making it by far the largest billboard in Times Square.

It was built by Vornado Realty Trust as part of a redevelopment of the Times Square Marriott Marquis hotel’s façade and retail spaces.

On its unveiling, the sign is showing whimsical animations from Universal Everything, a creative agency and studio collective, to be followed by Google as its debut advertiser later this month. Google has bought advertising on the sign through January 2015.

With its marquee position in the middle of Times Square, the high-contrast, high-resolution billboard is visible from almost the entire square. It is also well positioned for high visibility during the annual New Year’s Eve telecast from Times Square, as well as other broadcast programs hosted from the square, including "Good Morning America" and shows from Telemundo and Extra.

According to the “eyes on” audience ratings from the Traffic Audit Bureau, the new sign will generate more than 2 million impressions per week, not to mention the roughly million celebrants on New Year’s Eve. It is equipped with high-definition crowd cameras, as well as interactive, social media, and live broadcast feed capabilities.

Ad placement on the sign costs $2.5 million per four-week period, meaning that the sign should generate about $32 million in revenue a year.