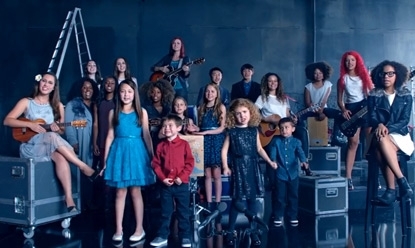 Despite sagging sales and growing skepticism from industry observers, Kohl’s is belting out its holiday marketing strategy, starting with an elaborate “Let It Go” sing-off.

A year after Frozen’s release, the franchise is still crazy popular, so Kohl’s has spent the fall collecting videos in its “Sing Your Heart Out” contest, with participants uploading their own renditions of “Let It Go.” Voting is ongoing, and the winner will be revealed in a spot on the upcoming American Music Awards. The Wisconsin-based retailer has also made every Friday a #FrozenFriday, offering special promotions on movie-related merchandise.

While the Frozen connection -- along with other high-profile broadcast integration programs that include the Voice and Jimmy Kimmel Live -- bode well for the holidays, Kohl’s struggles are concerning to industry analysts. Last week, the company announced that its third-quarter sales had fallen 1.6% to $4.37 billion, from $4.44 billion last year. On a same-store basis, sales eased 1.8%. Net income sank 20% to $142 million, from $177 million in the year-ago period.

As a result, Standard & Poor’s Ratings Services has lowered its credit rating, reflecting its opinion that “the department store sector will remain highly competitive and Kohl's has lost some market share to other moderate department stores and off-price players because of its lack of effectiveness in executing its merchandising strategy," writes credit analyst Helena Song. Nor is it expecting much improvement. "We also believe the company's weakened operating trends, including negative same-store sales, is unlikely to improve meaningfully in the near term,” adding that it is unlikely to upgrade the company in the next two years.

Paul Trussell, an analyst who follows Kohl’s for Deutsche Bank, says he also can’t summon up confidence that Kohl’s will turn sales around to its forecast of a same-store increase of 2% to 3% in the fourth quarter.

“We aren’t sure that households budget for gift giving will expand due to the calendar,” he writes in his most recent analysis. “And the typical glut of marketing from brick & mortar and e-commerce retailers during the holidays may prevent consumers from following through with Kohl’s loyalty and personalization messaging to the extent expected.”

“Kohl’s is catching-up to peers in terms of technology and assortment and that should lead to better trends moving forward than it has experienced in recent history,” he writes, adding that he was encouraged by the chain’s “willingness to test new ideas, tweak the current mix, and pursue brands.”

But he, too, does not expect Kohl’s to be able to match its aggressive fourth quarter estimates. He adds: “Kohl’s continues to be a “show me” story.”