With the stock market 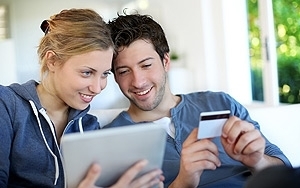 at new highs and consumers relatively unconcerned about the economy, comScore is predicting big gains in e-commerce this holiday season, with sales expected to climb 16% to $61 billion.

Of that, it expects desktop computer purchases to reach $53.2 billion -- a 14% gain from last year -- while mobile is forecast to jump 25% to $7.9 billion, which represents 13% of digital commerce.

“Negative economic sentiment is at a five-year low, the stock market is near all-time highs, and inflation has been kept in check,” says Gian Fulgoni, executive chairman emeritus, in its announcement. "The one negative is that real wages for many middle-class Americans have not grown and in fact may have declined slightly. That said, the recent trends we've seen in online consumer spending suggest that American consumers are ready to open their wallets and embrace the spirit of giving this holiday season."

comScore’s forecast covers spending in both November and December. It also announced its preliminary estimate for third-quarter spending, which it says climbed 13% to $53.9 billion. That makes the “twentieth consecutive quarter of positive year-over-year growth and sixteenth consecutive quarter of double-digit growth,” it says. Mobile spending, including tablets, contributed $6.7 billion to that total, a 17% from the same a year ago.

Earlier this month, Forrester Research forecast a $10 billion jump in online spending for the holiday season, estimating that U.S. e-commerce sales will reach $89 billion in November and December. That’s an increase of 13% from last year.

Meanwhile, the National Retail Federation says the season is getting off to a slow start, both online and in stores. Its latest take on consumers finds that 45.6% of those in its survey haven’t started shopping yet. And while that is relatively flat, compared to the 46.2% who reported not having started last year at this time, it’s the lowest in the seven-year history of the survey.

"Online Shopping" photo from Shutterstock. (Send to bottom of story)