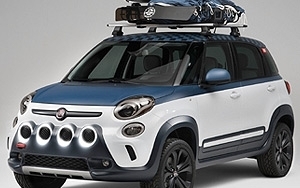 The company is touting the arrangement through a cross-branded promotion running now through Dec. 6.

The effort centers on a "how-many-gumdrops-in-the-jar" type guessing game, wherein a consumer who gets the number of Vans shoes inside a Fiat 500L (parked at Turtle Bay Resort for the effort) will receive a Mark Richards custom shaped surfboard, in addition to 12 pairs of Vans shoes, enough for a year.

There is also a one-off Fiat 500L Vans design concept car that will be at the L.A. Auto Show. The filling of the car ritual will be streamed online, where people can submit their guesses. Then the vehicle will be at Vans World Cup of Surfing on Sunset Beach on Nov. 24, where it will remain until Dec. 6, per Fiat.

The Fiat brand first partnered with Vans in July 2013 during the Vans US Open of Surfing in Huntington Beach, as exclusive auto sponsor. At the nine-day event in July and August this year Fiat had its whole lineup of vehicles there for the event, which brought in about half a million visitors, and is broadcast on CBS and shown in distribution to some 110 countries. Fiat joined other sponsors Ion, G-Shock,  Paul Mitchell, Red Bull, Bose, Verizon and Samsung Galaxy.