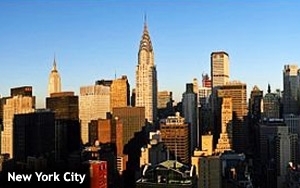 In one of the more ambitious municipal digital access projects ever undertaken, New York City is planning to bring free public WiFi to the masses with a project that will replace thousands of public pay phones with a network of digital kiosks called LinkNYC.

In addition to the free WiFi, the “Links” — as the kiosks are called — will have touchscreen interfaces and carry digital advertising on large displays on the sides of the rectangular, monolith-style installations.

The LinkNYC plan would massively expand WiFi availability across all five boroughs of New York City through up to 10,000 of these Link stations, which would also offer free charging stations for mobile devices and free voice phone calls anywhere within the U.S., as well as more standard pay phone services like access to the 311 information and 911 emergency hotlines.

The plan envisions two versions of the kiosk, a broad model with more display surface for commercial areas, and a narrower, more understated model for residential neighborhoods. Installation is scheduled to begin next year.

Advertising plays a key part in the program, which calls for most of the buildout and day-to-day operations to be funded by ad revenues. The city estimates that digital advertising on the kiosks could generate $500 million over the next twelve years, according to The Wall Street Journal. The display surfaces can also carry public service announcements during major events and emergencies.

The LinkNYC project is the brainchild of CityBridge, a consortium of experts from the worlds of technology and advertising, including outdoor transit advertiser Titan; Control Group, a technology and design company; telecom device maker Qualcomm; and computer and display manufacturer Comark. Titan will handle advertising sales for the network.

Titan previously installed Gimbal mobile beacons in around 500 phone booths across New York City but was later forced to remove them at the request of City Hall after BuzzFeed reported their existence. Although Gimbal beacons don't gather data about mobile users directly, once a user opts in and is detected by a Gimbal beacon, their mobile device automatically sends a signal to Gimbal’s servers, including information about their location, meaning that the company is still able to track users to some degree.

Titan isn’t the only outdoor ad company working with public agencies in the Big Apple. Back in March, CBS Outdoor unveiled its “digital underground” out-of-home network based in New York City Transit subway stations. In 2012, the company partnered with the MTA to install a network of 100 large, double-sided digital displays at the entrances to subway stations around Manhattan.