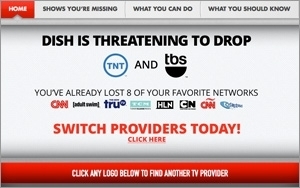 Another anti-Dish Network marketing campaign -- this one from Turner Broadcasting -- has begun.

A site called “SaveMyShows.com” talks up a threat that Dish is nearing a deadline -- December 5 -- when it will take off Turner’s biggest viewing networks, TNT and TBS. In October, Dish already took off eight other Turner networks, including CNN and Adult Swim.

In a statement, Turner said: “Our efforts in recent weeks to restore the Turner networks to Dish customers have been rejected at every turn by Dish leadership. The upcoming expiration on December 5 of our carriage agreement for TNT and TBS means Dish may drop those networks as well.”

It adds: “We remain hopeful that we will reach an agreement that restores our networks to the air and eliminates the risk of Dish removing additional Turner networks from its channel lineup.”

This follows up a marketing campaign started from CBS, “KeepCBS.com,” also in dispute with Dish over carriage fees for its networks/stations, which includes on-air promos in key Dish markets. There is a November 20 deadline.

CBS notes, according to the National Association of Broadcasters, that “Dish has been directly involved in one-third of all reported retransmission disputes with broadcasters resulting in TV blackouts.”

Speaking to Bloomberg News, Dick Parsons, former chairman/CEO of Time Warner, said with regard to Dish and Charlie Ergen, chairman of Dish: "People don’t really care about the economics between the carrier and the provider of the content. They just want their football. It’s football season. It’s CBS. Charlie’s going to lose.”

During a recent Dish earnings phone call, Ergen said there is a likelihood that the bigger Turner networks will be dropped. He went on to say TNT and TBS programming isn’t as good as programming on AMC, and with CNN’s audience now at half the audience it had, perhaps the cable news model doesn't work anymore.