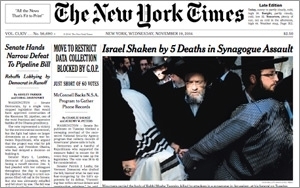 The New York Times debuted its first print native advertising product, a high-profile multi-page ad for Shell that wrapped the newspaper, while The Washington Postlaunched its most prominent online native ad product so far, “BrandConnect Perspective,” in conjunction with its online opinion section.

The NYT’s first-ever print native ad placement was an eight-page print wrap, including an eye-catching semi-transparent cover, which enveloped the front section of the newspaper for home delivery subscribers, and the business section for copies sold at the newsstand.

The ad, titled “Cities Energized: The Urban Transition,” provided an editorial platform for Shell to explore issues related to urban design and energy efficiency, thus highlighting Shell’s own commitment to sustainability along the way.

Also this week, The Washington Post launched “BrandConnect Perspective,” a native ad feature that gives advertisers the opportunity to publish commentary and opinion pieces featured in the newspaper’s online opinion section. This marks the first time that advertiser content will appear alongside the Post’s own opinion content; as in other native placements on the site the content is labeled as advertising. The new ad placement launched with Bayer as the debut contributor.

Kelly Andresen, Washington Post director of ad innovations, explained: “By giving advertisers bylines and contextual relevance, BrandConnect Perspectives allows marketers to share their messages with a highly engaged audience. This product is a unique extension of our BrandConnect native ad platform, and just another example of our commitment to create valuable solutions for advertisers.”