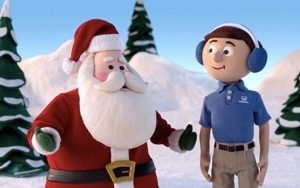 Honda's Southern California retail organization has launched a year-end campaign bringing back its Helpful Honda Guy (not to be confused with Mr. Opportunity, a national year-end sales-push character), a character developed by the region’s marketing organization. The SoCal Honda Dealers also have a presence at the Los Angeles Auto Show this week, where it owns the entrance with a blue-footed path to the front doors and a gigantic claymation Helpful Honda Guy.

The organization's TV and social channels are running a series of new ads, and behind-the-scenes bloopers. In the ads, the "Guys in Blue" do "random acts of kindness," a staple of the campaign narrative. They surprise Santa, his elves and the Nutcracker. The campaign comprises four TV regional SoCal spots. Two are set to original music in a kid's singalong style, with the characters doing things like feeding a Yeti spaghetti and helping Santa’s elves with elf-esteem. Another has them hanging mistletoe and pairing up an elf and his gingerbread girlfriend and doing a weight loss plan for Santa involving pumping iron with candy canes. Santa cheats, however, eating the candy. All spots wrap with the Guys in Blue saying they can also help you get into a new Honda.

Honda this year surpassed Toyota for the top-selling car in California. In 2012 and 2013, partly because of the state's stringent fuel efficiency and emissions standards, the top-selling car was Toyota Prius. This year it was passed by Accord, with help from the new hybrid version of the car, according to the California New Car Dealers Association.

California accounts for 40% of all electric powertrain cars sold in the U.S. The state also bested the rest of the U.S. last year in terms of sales growth of all vehicles. Sales were up in the state last year by 11.9% versus 7.2% for the entire U.S., per the organization. California is also dominant by far for car sales, with 62.1% of its new-vehicle sales being cars, versus about half for the rest of the country. And Japanese brands are also dominant in the state, constituting nearly 50% of sales versus about 37.4% for the rest of the country.

Toyota had top market share by far at 21.7% of the California business followed by Honda at 13.5% and Ford at 11.1%. After that are: GM Nissan, Hyundai and Kia, Chrysler, VW, BMW, and Mercedes.