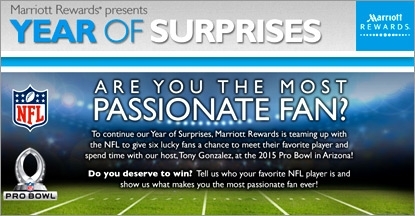 Marriott is hosting a “Most Passionate NFL Fan” contest and the winner will be sent to the 2014 Pro Bowl in Arizona.

The promotion, via its Marriott Rewards loyalty program, caps its “Year of Surprises” platform, which celebrated the program's 30th anniversary. The promotion included asking people to nominate a loved one who deserves a special celebration, and throwing them a surprise party. Recent parties have included a Basketball Surprise in LA, End of Treatment Celebration and a Surprise Spa Day in San Diego.

The current contest invites fans to share their passion for football through 30-second videos or captioned photos that showcase an unrivaled spirit for the game and include who their favorite player is for a chance to meet that player. The deadline for entering is Dec. 2.

Six individuals will be chosen as grand prize winners, receiving the ultimate NFL experience with host and NFL legend Tony Gonzalez, at the 2015 Pro Bowl in Arizona.

"We know our members are passionate about travel and so much more in life, so we want to reward them with something beyond just points," said Rich Toohey, vice president, Marriott Rewards, in a release. "If our loyalists are football fans, we want to treat them to a once-in-a-lifetime experience and what better way to do that than with our partnership with the NFL?"

Winners receive a trip for two to Phoenix, tickets to the 2015 Pro Bowl in Arizona, and a chance to hang out with their favorite player on Jan. 24, the day before the game.

The voting period for the top 100 entries, which is open to the public, lasts from Dec. 12-19. Submissions are eligible from fans in the 50 US/DC and Canada (excluding Quebec). No purchase is necessary.

In other NFL/travel category news, United Airlines has renewed its relationship with the Cleveland Browns.

As the official airline of the Cleveland Browns, United will continue to fly the team to and from away games throughout the season. United also will maintain its presence at FirstEnergy Stadium and on ClevelandBrowns.com.

The airline will also provide exclusive opportunities to Browns fans, including the United Dream Destination, a contest at all home games where the team selects one fan to play a destination trivia game for a chance to win vouchers for United flights.