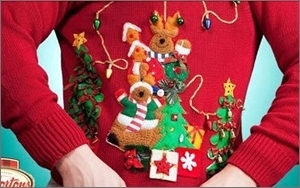 Tim Hortons Cafe & Bake Shop is pulling the wool (or rayon) over its U.S. fans' eyes this holiday season with a social and promotional events campaign tied to the ever-popular tacky sweaters theme.

The chain has rolled out a special cup design inspired by a vintage Fair Isle sweater that bears the message "Even our cups get dressed up for the holidays!," along with the campaign's hashtag, #TimsTackySweater.

During the holiday promotion period, fans who use the hashtag and share their tacky sweater moments on Twitter, Instagram and Vine will be entered in prize-pack giveaways. In addition to promoting giveaways on its own social media, the fast casual chain has partnered with local news outlets in some of its U.S. markets (like Fox Toledo) to give away Tim Hortons gift cards and locally themed gift packs.