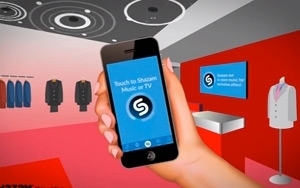 Mood Media Corporation, one of the world’s largest providers of in-store media, is bringing mobile interactivity to thousands of affiliated stores through a partnership with Shazam. The new service, called Shazam In-Store, will enable retail businesses to create their own location-based mobile marketing programs using Shazam’s audio-recognition app in combination with Mood’s Presence technology.

Shazam In-Store uses the existing Shazam app and Mood’s Presence signal, which allows retailers to connect with customers through inaudible digital watermarks in Mood’s overhead music systems. The customer just needs to activate the Shazam app and use it to detect an audio message or song; the app then recognizes the digital watermark and delivers the requested song information, along with targeted content from the business, directly to the mobile device.

A number of big retail chains are already using the Shazam In-Store service, including Office Depot.

Mood Media North America President Ken Eissing stated: “Proprietary apps for mobile devices are expensive to develop and are often underutilized by customers, but Shazam’s massive user base allows businesses to benefit from a high probability of connecting with customers through that platform.”

Earlier this month Mood announced that it has expanded the Presence mobile interactive platform to 100,000 additional locations across the U.S., bringing the total number of locations with Presence enabled to 175,000 nationwide (the first wave was installed in September of this year). By the end of the first half of 2015, Mood hopes to have increased that to 300,000 locations, out of a total 500,000 using Mood’s in-store media system. And last month, the company unveiled Mood Social WiFi, which allows small and midsized businesses to offer customers free WiFi along with marketing content.