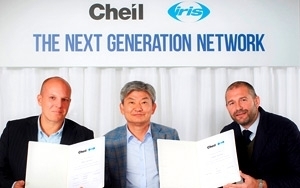 Cheil Worldwide, the ad-marketing holding company based in Seoul, has signed a deal to acquire what it called “a significant initial investment” in UK-based ad agency iris.

Cheil indicated that the deal has options that the firm can exercise that would give it 100% ownership of Iris over the next five years.

Cheil said the initial investment in iris will kick off “a new partnership that will enable the two companies to extend and deepen their global capabilities in creativity, strategy, retail, digital, data, analytics, B2B and CRM, while offering clients the most progressive work available in the world today.”

Exact terms weren’t disclosed, but Cheil did confirm that with its investment, U.S. publisher Meredith will no longer have any ownership stake in iris.

Cheil, which was once the in-house Samsung agency before it was spun off, also owns U.S. creative agency McKinney, which it acquired in 2012. In addition, it owns The Barbarian Group, which it bought in 2009.

Daiki Lim, President and CEO of Cheil Worldwide, said: “Our goal was to find the right partner who could match our determination and drive. We've watched with awe how iris has built its global business” since it was formed in 1999.  “Together with iris, we will provide a different level of service that is able to achieve amazing new creativity and offer best-in-class capabilities. This relationship is a key catalyst in our ambition to be the best possible partner to our clients to deliver 'Ideas That Move'.”

Ian Millner, joint chief executive at iris, added: “This partnership won’t change who we are or what we do as a creative innovation network – but will extend our global reach and capabilities, and enable our clients and people to benefit from the huge opportunity presented by a true ‘East Meets West’ and ‘West Meets East’ network. “

Iris has a staff of 1,000 with 17 offices worldwide. Clients include Diageo, adidas and Barclaycard. Cheil has a global staff of 5,000 operating in 48 offices in 41 countries.