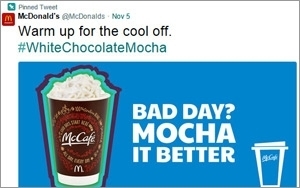 McDonald's and KFC are the top two social media performers among restaurant chains, according to a report from the Sprinklr social media management platform.

The top three restaurant brands performed strongly on every metric studied during a 30-day period ending Sept. 30, including engagement with followers, total numbers of impressions and earned impressions, active audience and others.

However, the data also confirm what social marketers know by now: When it comes to content, effectiveness often bests frequency. Higher numbers of posts by a brand don't necessarily equate with higher numbers of followers, engagement, or even impressions. As just one example, No. 3 Pizza Hut (29.1 million followers) made 2,205 posts during the tracking period and yielded engagement of 285,717, versus No. 8 Domino's'  (28.3 million followers) lower engagement (167,273) for nearly double the number of posts (4,004).

Sprinklr defined engagement as a weighted composite of the total number of likes, comments, favorites and retweets that followers had with a piece of branded content. Active audience was defined as number of followers that engage with brands by taking small actions such as likes or favorites.

The full report, including all metrics definitions, can be downloaded free from Sprinklr's site.