Bud Light is gearing up for the Super Bowl 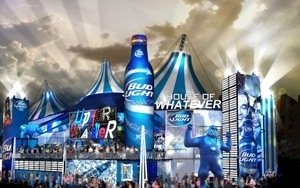 with the announcement of its House of Whatever.

The on-the-ground activation in Arizona during Super Bowl XLIX in January is a continuation of the brand’s “Perfect Beer for Whatever Happens” creative campaign, which was introduced at Super Bowl XLVIII and continued with this summer’s Whatever, USA.

Bud Light has taken over hotels, cruise ships and even entire towns to provide consumers with incredible once-in-a-lifetime #UpForWhatever experiences. The Super Bowl extravaganza will be a continuation of the brand’s tradition of epic events, according to a spokesperson.

It will feature three days of parties, concerts and one-of-a-kind activities. The brand unveiled Bud Light House of Whatever to the public at a special event in Phoenix over the weekend with a surprise appearance from Grammy-nominated DJ Steve Aoki, the first artist announced to perform at House of Whatever Super Bowl weekend.

The event took place on the rooftop pool deck at the hotel in downtown Phoenix that will be taken over by the Bud Light House of Whatever in January.

Fans have really enjoyed the “Up For Whatever” activations Bud Light has done this year, says Bud Light Vice President Alex Lambrecht.

“The Bud Light House of Whatever will keep that spirit going, so expect it to be the most unique party experience in Phoenix,” Lambrecht says in a release. “You could say it’s the Super Bowl version of Whatever, USA.”

Aoki will perform Jan. 31 at the House of Whatever. Bud Light will reveal more talent announcements in upcoming weeks.