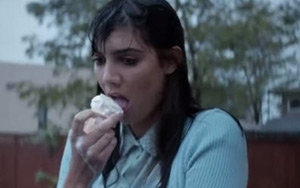 Struggling to compete with weight-loss apps, Weight Watchers is not only getting a jump on the category's post-holidays push, but eschewing the category's predictable celebrity pitches in its new campaign.

The campaign's first spot portrays the complicated emotional relationships with food that feed weight gains and make losing weight so difficult. It shows a variety of women and men of different ages, as well as children, eating sugary treats or high-calorie snacks in response to all kinds of emotional triggers.

One kids' football team celebrates a victory with pizza, while members of a losing team eat pizza to console themselves. A young woman eats an ice cream cone when she's happy, and another when she's sad. A mom munches on chips while carpooling a bunch of screaming kids, and another woman does the same while hiding out in her bathtub (fully dressed). A guy stations himself next to the appetizers table at a party because he's too shy to talk to people.

It ends with the campaign tagline, "Help for the Hard Part," followed by the Weight Watchers logo.

The 60-second ad (a 30-second version has also been made) will debut in movie theaters on Nov. 28, and on national television starting Nov.30, with "The Walking Dead," "Resurrection" and "Once Upon a Time." Other programs scheduled include Dec. 15th's season finale of "The Voice," the Rockefeller Center tree lighting, the "Saturday Night Live" Christmas special and "Peter Pan Live."

The brand chose theaters and TV shows that tend to be "co-viewed" — meaning watched by more than one person in the household — to try to spark discussion about those emotional connections with food.

The campaign is the inaugural work for Weight Watchers from Wieden+Kennedy, Portland, which was chosen to reposition the brand this past April by WW's North America President, Lesya Lysyj. Lysyj, who joined the company in late 2013, acted as its chief marketer for most of this year, after former SVP marketing Cheryl Callan left the company. Lysyj hired Maurice Herrera as the new SVP marketing in early October.

Herrera, who was most recently CMO at GoGo Squeeze parent Materne, explains that the campaign is based on consumer research — one-on-ones and mini-groups of two friends or a few friends. The research confirmed that consumers know that the Weight Watchers program works, but indicated that they've become skeptical of the celebrity-dominated marketing approach used by many weight-loss programs, including Weight Watchers, which featured Jennifer Hudson, then Jessica Simpson, in its most recent campaigns.

Celebrity success stories tend to make it look like losing weight is easy, whereas people know that the reality is that it's tough to lose weight and maintain those losses, Herrera points out.

In an atypical move, Weight Watchers chose to start the new campaign prior to the holidays. The idea, he says, is to make an honest and relevant connection with prospective program members and get the conversation going through initial creative that focuses on conveying the brand's candid, empathetic approach to weight loss.

Then, the logic goes, the brand will be familiar and "at the top of the list" when it introduces other television creative with more benefits- and services-oriented messaging, with a ramped-up airing schedule, after the holidays, Herrera says.

The later creative will position Weight Watchers as a program uniquely able to help people get through the difficulties of weight loss and permanently change their relationships with food because of the live human support network available through its meetings, in particular, as well as its online community and tools and branded meal and snack solutions, he says.

The campaign will also include digital advertising and a very active social media component. Social media is a very "personal and honest" medium, so it marries well with the television creative and overall mission of repositioning the brand as contemporary and relevant, Herrera says.

Last year, Weight Watchers' total, worldwide revenue declined 6.3% (to $1.7 billion), its net income declined 20.5% to $205 million, and its earnings per diluted share declined 14%, to $3.63. In its most recent quarter, ended in September, Weight Watchers reported revenues down 12.9% and earnings per share down 37% versus the year-ago third quarter — although the company raised its full fiscal year adjusted earnings guidance to between $1.95 and $2.05, from its previous guidance of between $1.65 and $1.85.

Kantar Media data show Weight Watchers having spent $82.7 million on U.S. advertising in this year's first half, down from $100.3 million in first-half 2013, reported The New York Times.