In Weaker Black Friday Weekend, Mobile Is The Big Winner 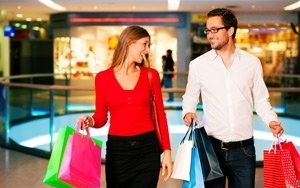 Thanks to shifting retail strategies, Americans continue to reinvent their traditional shopping behavior, blurring the lines between on and offline holiday shopping.

The biggest change is that fewer people shopped Thanksgiving weekend, and they spent less. The National Retail Federation reports that 55.1% of American consumers were in stores and online over the holiday weekend, down from 58.7% last year. Traffic for the four-day period, which in many stores began as early as 5 p.m. on Thursday and continued through Sunday, fell 5.2% to 133.7 million unique holiday shoppers, compared with 141.1 million a year ago.

And total shopping (including the many people who shop more than once) also dropped, falling to 233.3 million trips from 248.6 million a year ago. Spending also declined, slipping 6.4% to $380.95 per shopper. Black Friday was still the biggest day, with 86.9 million shoppers in stores or online. And 43.1 million shopped on Thursday -- essentially flat.

But experts are confident that with the strengthening economy and stronger consumer sentiment, this is all good news, and that those declines represent people shopping differently. They are doing more online and mobile browsing and buying, with a shifting — but still powerful — allegiance to the physical thrill of storming the mall.

“Some people came to shop on Friday morning, but had already finished all their holiday shopping online on Thursday,” says Ramesh Swamy, a retail analyst at Deloitte who spent the weekend scouting malls in the Los Angeles area. “People are more adept at finding the best deals online. As the channels continue to blur, and as people are able to shop earlier and earlier from their home and mobile devices, and as stores extend the promotionality of the season, Black Friday itself won’t matter much,” he tells Marketing Daily.

He says it’s also clear that the shopping event is becoming more of a family-focused event, with people bringing children. “They aren’t so much shopping for deals as they are looking for ways to spend time with friends and family.”

Mobile is emerging as the season’s true game changer. IBM reports that online and mobile shopping hit record levels on Thanksgiving and Black Friday, and that for the first time, online traffic from mobile devices was stronger than traditional PCs on Thanksgiving Day, making up 52.1% of all online traffic. And the NRF survey found that 45.4% of smartphone owners say they used the phone to research purchases. Mobile traffic to Best Buy’s Web site was so fierce it crashed, forcing the chain to announce that it was “taking proactive measures to restore full performance.”

Overall, IBM says online sales on Thanksgiving jumped 14.3%, and then 9.5% on Black Friday.

Walmart and Target are both declaring themselves early winners. “Not only did we have millions of customers shopping our stores,” says Walmart’s Laura Phillips, SVP of merchandising, in a statement, “but we’re confident Walmart was the first stop of the night for most of them. We saw lines for tablets and TVs snaking throughout the stores.”

And at Target, executives were crowing about the success of its new strategy of offering a “pre-sale” of Black Friday deals on Wednesday, both in stores and online. “By 9 a.m., online sales had already exceeded total sales from the same day last year,” the Minneapolis-based chain says in a statement. Big sellers include the iPad Air 2, Beats by Dre Solo HD headphones and the Intex Pure Spa Inflatable Hot Tub. And it says Thanksgiving was its biggest online sales day ever.

“A strengthening economy that changes consumers’ reliance on deep discounts, a highly competitive environment, early promotions and the ability to shop 24/7 online all contributed to the shift witnessed this weekend,” says NRF President and CEO Matthew Shay in its release. “We are excited to be witnessing an evolutionary change in holiday shopping by both consumers and retailers, and expect this to trend to continue in the years ahead.”