Cyber Monday Shaping Up To Be Biggest Ever 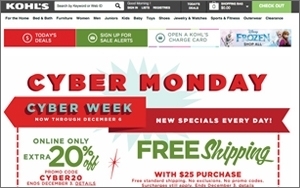 With sales up more than 8.5% over last year, CyberMonday is shaping up to be a retail barnburner. IBM Digital Analytics Benchmark says mobile continues to carry more clout, accounting for 27.6% of the day’s actual sales, which represents a 27% bump from last year, and driving 41.2 % of traffic. And JCPenney says that more than 50% of its CyberMonday transactions were via a phone or tablet.

That news comes amid the National Retail Federation’s prediction that more than 126 million people shopped online on Monday, down from 131.6 million last year.

Part of the decline, the retail trade group says, is because it’s hard to convince shoppers that any one day is more promotional than the next. “For today’s shopper, every day is ‘Cyber Monday,’ and consumers want and expect great deals, especially online, throughout the entire holiday season — and they know retailers will deliver,” says Matthew Shay, the NRF’s president and CEO.

But retailers are pulling out all the stops to convince consumers to click “Buy” right now. Kohl’s, for example, turned Cyber Monday into Cyber Week, and has streamlined its online experience “to introduce a faster, expedited checkout process and the ability for customers to track savings in real-time,” the Wisconsin-based retailer says.

Walmart also shifted to a Cyber Week plan, and doubled the number of deals it offered on Monday.

As a result of these earlier promotions, online sales were already strong coming into the holiday weekend, and made big year-over-year gains. ComScore reports that so far in the holiday selling season, U.S. desktop retail e-commerce spending is up 15% to $22.7 billion. Sales on Thanksgiving Day climbed 32% to $1.01 billion, the first time Turkey Day has passed the $1 billion mark. Black Friday online sales were also powerful, up 26% to $1.51 billion, even as sales in physical stores fell 11%.

Sucharita Mulpuru, an analyst for Forrester, writes in her blog that she’s not surprised. “Black Friday becomes more irrelevant every year,” she notes, “eclipsed by Cyber Monday, shipping cut-off dates in December, and even Thanksgiving.”

This Cyber Monday “promises to be the biggest ever as more consumers shop online and look for great deals.”