Ad agencies would not be indemnified against patent claims related to the work they do for advertisers, according to recommendations released this morning by the Association of National Advertisers. The guidelines, which are part of a new white paper the ANA released this morning on so-called “patent trolls,” assume agencies are liable for any patent infringement related to work they produce for their clients.

The ANA recommended that marketers add new “indemnity clauses” to their contracts, which would require the agency to “step in and defend the client in the event of a patent infringement claim.”

While the ANA acknowledged that “shared approaches to liability are gaining traction in the marketplace,” it encouraged its members to consider whether it “makes sense.”

The ANA said it issued the white paper and the recommendations because patent trolls -- also known as “patent assertion entities” whose sole business is to buy patents in order to file patent infringement claims -- are on the rise.

The costs to avoid litigation can sometimes rise to millions of dollars. 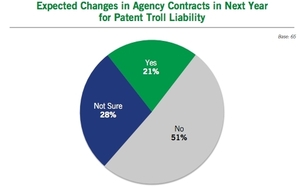 “The patent troll controversy has caused considerable debate between agencies and marketers on responsibility of patent troll indemnification and liability,” the ANA stated, noting that it can cost “millions of dollars” for marketers to defend against such claims.

The ANA also released findings of a study of 78 members conducted in September, which found that nearly half (45%) consider patent trolls either a “major or moderate” issue for their businesses.

Sixty percent of respondents reported that their agencies assume either all (30%) or the majority (30%) of the risks associated with patent infringement.